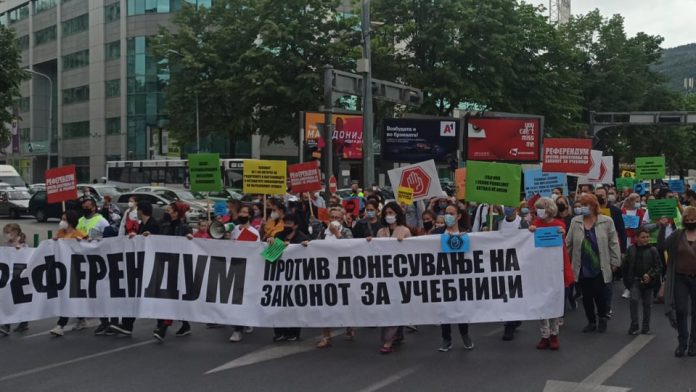 A civic initiative advocating against the complete digitization of the middle and high school curriculum in Macedonia has begun collecting signatures for a referendum in order to halt the controversial education reforms.

This is their second attempt to gather signatures and include their objections to electronic textbooks as part of the daily agenda in Parliament, however, the State Elections Commission refused the submission, stating the signatures were not gathered in a “legal” manner.

Dragana Spasevska, one of the coordinators of the movement, which is simply called “Uchebnici i nastava mora da ima” (There must be books and classes), stated that they will gather the necessary signatures and continue with the planned protests on May 26.

A swift reaction from the Ministry of Education condemned the move, stating that blocking the decision by referendum is absurd.

Minister of Education Mila Carovska is determined to replace traditional textbooks with electronic counterparts, as part of a broader set of reforms. This, according to Carovska, is going to bring “European best practices to our schools”.

If the reform is passed and gets fully implemented, students around Macedonia will begin learning from digital textbooks, via computers and tablets, starting with the fourth grade.

On May 15, a protest that took place in Skopje and other towns in Macedonia received the support of multiple advocacy groups, formal and non-formal citizens’ associations.

In the meantime, part of the students around the country are boycotting the educational process.