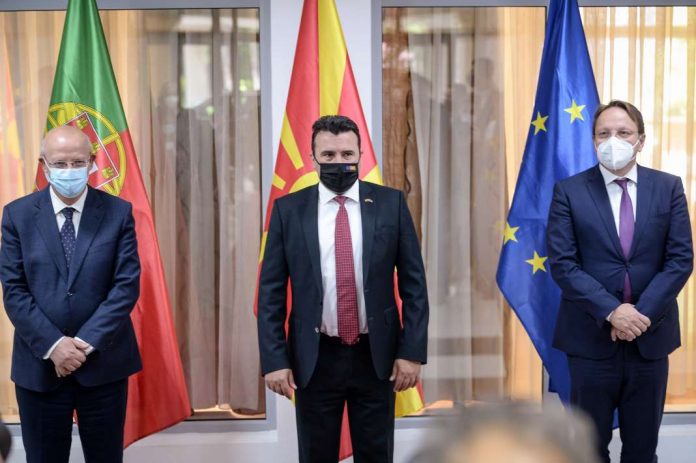 The foreign ministers of Austria, Czechia and Slovenia came out with a statement of support for Macedonia following their meeting with Foreign Minister Bujar Osmani on Saturday, now joining Croatia and Slovakia who are for the immediate opening of EU accession talks.

“There is no time to waste on bilateral issues and it is time for the EU to fulfill its promise to Macedonia by holding the first intergovernmental conference,” was the statement coming from the diplomats.

The message reads like it was directed more to the EU as a whole then to Bulgaria, which has been made clear by a number of diplomats that its demands of Macedonia are unprincipled and represent a hindrance to the region’s integration.

Austria has joined Croatia, Czechia, Slovakia and Slovenia as a group of countries that openly support Macedonia and who maintain that Bulgaria’s issues with Macedonia should not be part of the negotiation framework.

Santos Silva and Varhelyi were in Sofia on Friday with a proposal to move the dispute out of the negotiations framework and include it as part of the Stabilization and Association Process – a Western Balkans oriented pre-accession policy.

Prime Minister Zoran Zaev stated following his meeting with the diplomats that Macedonia’s position on the matter of identity and language not being open to negotiations, has been received with some understanding from Brussels. “We are strongly committed to finding a solution,” added Zaev.

But regardless of the statements, the problem that Bulgaria has with the existence of the internationally-recognized Macedonian nation and language can extend for years.

For now, Bulgaria is comfortable in adhering to its ludicrous position, for which it claims stems from its core national interests and is safeguarded by a national consensus.

In a lack of a unified foreign policy on the part of the EU, its individual member states have little interest in spoiling their own relations with Bulgaria.

Sofia may come to feel some antagonism from joint statements similar to the one above, but this isn’t going to be enough for its national policy to change course and open up to the kind of principles espoused by most other EU members.

Holding a strategic position on the Black Sea, Bulgaria is part of NATO’s maritime deterrent against Russia which provides Sofia the comfort it needs to prolong Macedonia’s woes indefinitely.