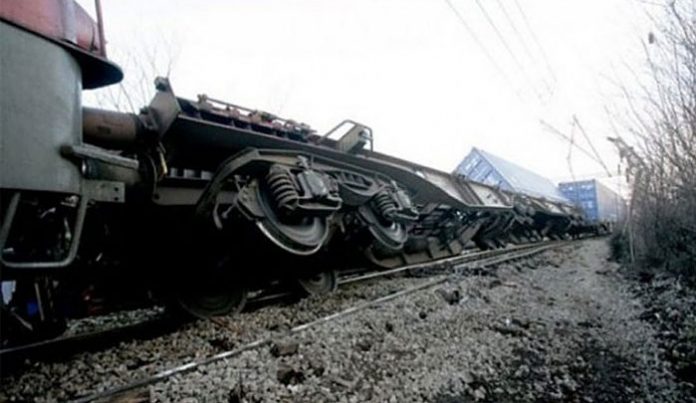 A locomotive operator was burned by a fire at the train station in Smokvica near Gevgelija and was taken to the local hospital for urgent medical aid, no cause was given for the third incident on Macedonian railroads in one month.

Earlier in May, a freight train derailed and crashed on Corridor 10, damaging 250 meters of track.

12 out of the 20 cars overturned, requiring 50 workers and machinery to conduct recovery operations on the important commercial corridor.

Hari Lokvenec, the director of the public enterprise for state roads didn’t comment on the financial cost of the incident.

On May 17, a passenger locomotive caught fire on the train station in Skopje.

The intervening fire brigade extinguished the fire and there we no injuries, however, the operator, again, didn’t comment on what had caused the fire.

All three incidents involved old locomotives which Macedonian Railroads is looking to replace as part of a new investment in rail infrastructure.

Macedonia recently announced it will invest in its portion of the north to south corridor which connects Belgrade and Thessaloniki, together with Serbia and as part of an EU grant.

Passenger traffic has been the lowest ever for the Macedonian Railroads network, averaging a loss of 20 million euro per year.

In addition to this, the enterprise owes around 160 million euros to domestic and international lenders.

The previous VMRO-led government invested in new trains and locomotives and sought to overhaul the tracks and buy additional cars. Although the upgrade did improve the standard for the passengers, it didn’t change the fact that very few people can rely on the railway’s slow system.

Macedonian Railroads gets the overwhelming share of its revenue from cargo, while only 10% of the capacity of the passenger trains are filled on average.

The debt and the structural issues has prompted the SDSM-led government to seek a private operator or a public-private partnership by 2020.

Macedonia is obliged to harmonize its legislation regarding passenger and freight railroad system with that of the EU as part of the accession process.