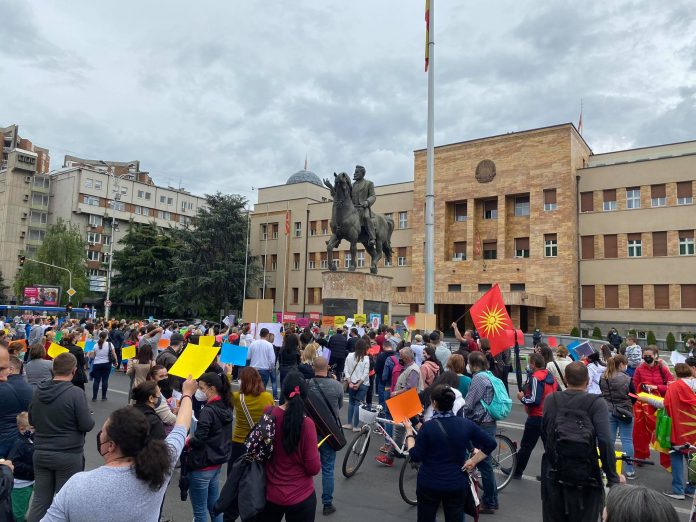 A parent-led movement against the phasing out of printed textbooks, as part of educational reforms staged a protest in Skopje and other towns around the country yesterday.

Several hundred people marched from the Ministry of Education, past the Government building and ended in front of Parliament where they demanded an end to the reforms.

A large number of high school students are also boycotting classes around the country as a sign of revolt.

Both parents and students are against a recent Ministry of Education plan to replace traditional textbooks with electronic tablets.

Parents of elementary and high school students argue the switch will impact negatively their children’s health and will remove the traditional connection one can have with a book.

Educators and experts have pointed out that the state is not ready to undertake the change considering the lack of power sockets for charging, spotty wifi connections and hundreds of students who don’t have access to the technology.

The decision is one in a string of controversial moves announced by Minister Mila Carovska since she took over the ministry in 2020.

Leaked documents about educational reforms appeared online showing the Ministry intends to reformulate social conventions like the use of the words mother and father. The reform also aims to reconsider the way students perceive gender and sex.

Macedonian Archbishop Stefan is one of many notables who has spoken against the intended changes. According to him, foreign concepts are being forcefully imposed on the majority of the people without their say in the matter.

The Ministry has not refuted the allegations. This is one of the reasons o the protest, which the movement stated will continue over the coming months.