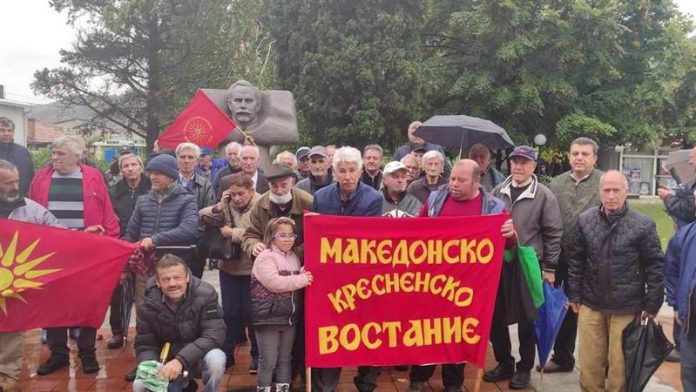 A declaration issued by the associations of Macedonians in Bulgaria on the anniversary of the Kresna Uprising officially calls for Sofia to end its policy of discrimination, assimilation and denial of ethnic Macedonians and to include them in Bulgaria’s constitution and census.

“Include the Macedonian minority in Bulgaria and the Bulgarian minority in Macedonia in the constitutions, with guarantees for their rights according to international standards and on a reciprocal basis.”

Stojko Stojkov from OMO Ilinden – Pirin says that they decided on such a step because according to them the situation between the two countries is deteriorating. He says that Republic of Macedonia should respond to the Bulgarian demands with reciprocity. He does not expect sincere intentions from Bulgaria, until Sofia conducts a real census in which there would be a column of Macedonians.

Asked about the declaration of the Macedonian associations, Prime Minister Zaev said that according to him, it is not European and it is not in principle for the country to interfere in the internal affairs of a neighboring country. The Constitution of the country, as he pointed out, and the Good Neighbor Agreement are clear in the part of non-interference in the internal affairs of other countries.

The request for Macedonia to give up the Macedonian minority in Bulgaria is one of the 5 + 1 points that were listed after the summit in Slovenia, where the unblocking of Macedonia’s European integration was on the table.

Former Macedonian President: Don’t be afraid to point out those that censor and control Macedonian consciousness