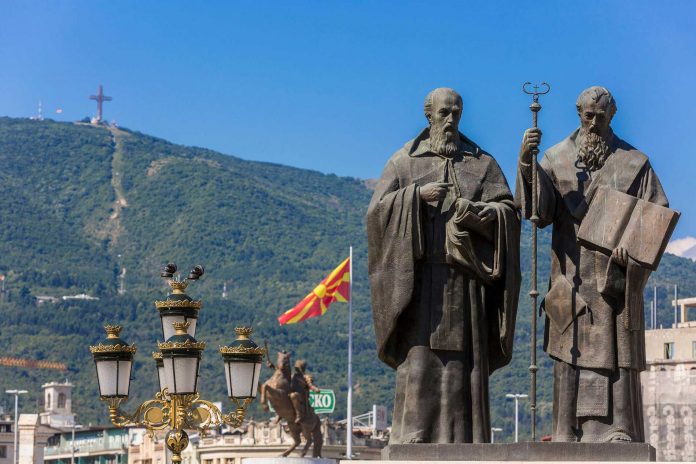 Saints Cyril and Methodius are giants in the Slavonic speaking world, founding medieval Macedonian and Slavonic literacy and the Christianization of people that came to stretch from Macedonia to Siberia.

May 24th is a national holiday in Macedonia to honor the saints, who created the first Slavonic alphabet, Glagolica and subsequently used it to spread Christianity among the Slavonic pagans. Today 300 million people use the Cyrillic script (successor to Glagolica) named in honor of Saint Cyril.

Besides being celebrated and honored in the Slavonic speaking world, the brothers have been recognized as co-patron Saint of Europe by Pope John Paul II.

Their legacy is visible today with the Cyrillic script having special place in Macedonian history and pillar of national pride.

Cyril and Methodius where born around 815AD into a families that was part of the Byzantine elite in Solun (Salonika). During that time Salonika and its regions where mainly populated a people that where a mix between what we today would consider ancient Macedonians and Slavonic speakers.

Methodius, who was the older brother, had spent many years as a military officer among medieval Macedonians, of which where also Slavonic tribes who according to official sources, had settled in Macedonia and other Balkan areas including Southern Greece in the 6th century.

Unlike Methodius, Cyril took the road of learning early on in life. He continued his education in Constantinople in the company of famous scholars, at the biggest university in the city.

Both Cyril and Methodius had individually experienced monastic life. They terminated their occupations as a military officer and librarian, respectively, in order to live secluded lives – Methodius stayed on mount Olympus and Cyril in a monastery near Constantinople.

Christening the Pagans in Macedonia

Although Paul the Apostle had carried out one of his early missions in Macedonia, this didn’t cause a complete Christianization of the people. The Romans had maintained their polytheistic religion in the centuries since and part of the native Macedonians did the same – observing multiple cults, ranging from that of Mythra to Dionysus but also unknown sects that had remained from the Macedonians.

During the time Byzantium, polytheism remained relatively strong throughout Macedonia outside the cities that were inherited from the Romans. The Eastern Church seated in Constantinople wanted to Christianize the polytheistic tribe known as Strumjani and further west into Macedonia along the river Bregalnica, Byzantium wanted to win over other tribes on its side in its fight against the Bulgars.

According to the official historic narrative, Cyril and Methodius created and later spread the first Slavonic writing script, based on Old Macedonian – Slavonic language, which they would use later on their missions in Europe. 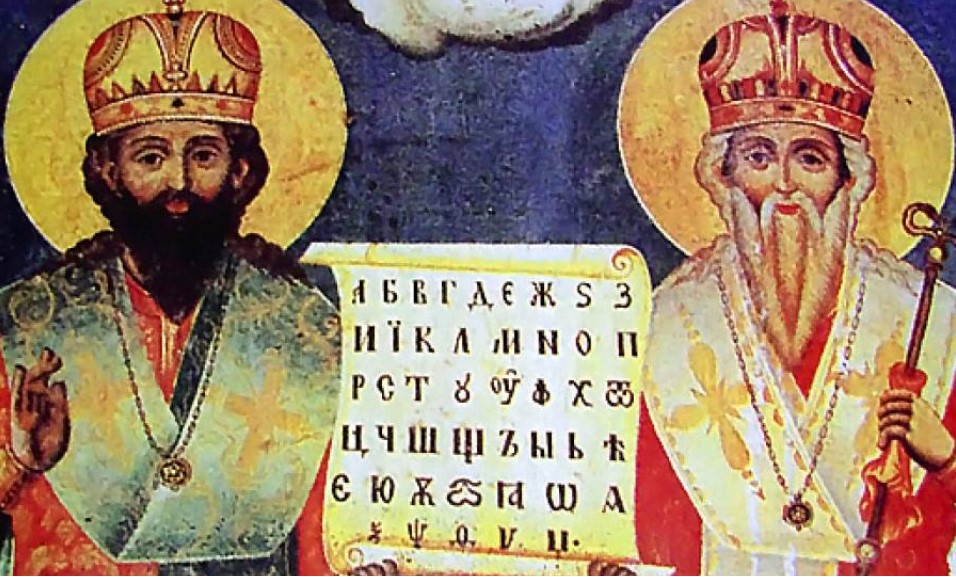 Alphabet based on the Macedonian language

The script, called Glagolica, was created by Cyril, who based it on the language of Macedonians living in the area of Solun – precisely in three villages: Visoka, Zarova and Suho.

This information was presented by the authors Vatroslav Oblak from Slovenia and Vatroslav Jegic from Croatia – both of whom dedicated their studies to the spoken language of the Macedonians in the area of Solun in the late 19th century.

Oblak, Jegic and others proposed the theory that the basis of the old Slavonic language is the Macedonian language, something that has been accepted by Slavists from around the world – except by those from Bulgaria.

Cyril and Methodius were successful in their mission along the river Bregalnica in modern-day Macedonia. They succeeded in Christening close to 60,000 people.

This experience earned them the trust of the Church in Constantinople which sent them on a few additional missions – to Baghdad where they debated with the representatives of the Saracens (Arabs); among the Khazars where they tried to unify the Islamic, Jewish and pagan adherents to Christianity; and in Moravia and Pannonia where they spread the Glagolitic script and reinforced the Slavic language in order to prevent the aggressive Germanization of the people.

The Moravian mission became Cyril and Methodius’ most successful. Their missionaries arrived to Moravia in 863 and immediately took to establishing schools in which they taught the Glagolitic script.

This wasn’t taken too kindly by the German clergy which accused them of spreading heresy, for which they faced a challenge coming from the Holy See in Rome.

Cyril’s and Methodius’ work received recognition from the Pope following lengthy debates in Venice and Rome in favour of teaching the holy scriptures in a language that is other than Greek, Hebrew and Latin.

Having proven their case in the debates, Cyril advocated that every nation has the right to learn in its own language.

In 869 in Rome, the Pope gave his blessing to the scriptures which they had translated into the Old Slavonic language, which was based on the Macedonian language of the time, often called Old Macedonian.

After the death of Cyril, Methodius continued his work in Moravia, however, the pressure coming from the German-Latin clergy became more fierce. Ultimately, he was exiled and imprisoned more than one time. This had taken a toll on his health and he died in Moravia in 885.

The Christening of Bulgarians

Bulgaria, which felt challenged by the spread of the Glagolitic script, had requested its revision. The Bulgarian Knez Boris asked Clement of Ohrid to perform a revision, which he refused out of respect for his beloved teacher, Cyril.

About 30 years following the start of the Moravian mission, in 893, the Bulgarian kingdom institutes the use of the Cyrillic alphabet. Clement and Naum continued teaching with the use of their teachers’ script – the Glagolitic.

According to historians on the matter, Cyril’s Glagolitic script had remained in use in Macedonia until the 13th century.

Saints Cyril and Methodius are celebrated across the Slavic world. Czechia and Slovakia revere the brother saints for their historic mission in Moravia and Pannonia, which had given the Slavic-speaking people a fighting chance against Germanic influence through culture and religion.

Today, the work of Cyril and Methodius is preserved and respected in Macedonia and throughout the Slavonic speaking world. The names of the brother saints are popular among Macedonians and the national university is the most important institution that carries their name.

It is important to note that Bulgaria negates the Macedonian language and its historic connection with the language spoken by Cyril and Methodius, despite having a difficulty in relating their work with Bulgaria, which had adopted the use of the Slavic language in 893.