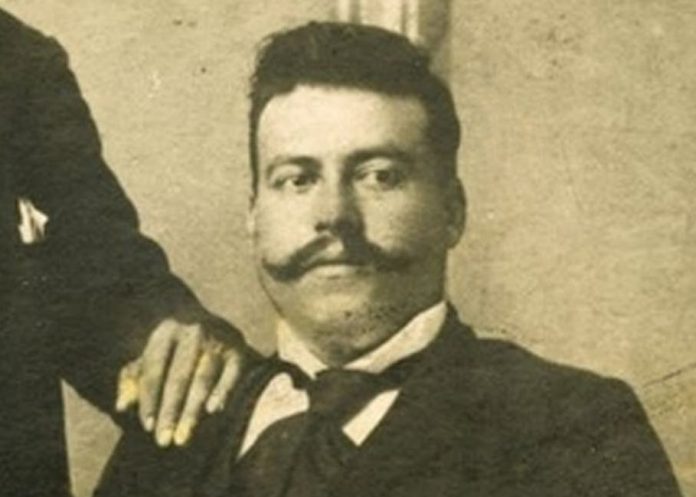 February 4th marks 150 years from the birthday of Georgi Goce Delchev – the vanguard of the Macedonian revolutionary movement whose political genius, moral authority and charisma helped sustain a formidable national struggle against the Ottoman Empire and the expansionist efforts of the neighbouring countries.

Delchev was born on February 4th, 1872 in the Macedonian village Kukush, today the town of Kilkis in Aegean Macedonia or Central Macedonia prefecture of Greece. He was one of nine children – five daughters and four sons born in the household of Nikola and Sultana Delchevi.

When Goce was young, some of the residents of Kukush had become awakened to the revolutionary idea for Macedonian freedom and some became soldiers in the unit of Gjorgija Pulevski who fought multiple wars against the Ottoman Empire, including the Kresna Uprising in 1878.

Those who knew Goce as a child personally have described his natural tendency to get along with everyone. He could be seen in the company of Macedonians, but also Turks and Roms. He also liked to spend time among the older residents of Kukush and listen to their conversations.

These personality traits enabled the young Goce to get along with everyone. Later on, when moved into a revolutionary role, his charisma earned the trust and respect of all Macedonians in the revolutionary movement, save for those who were into the embrace of the splinter, Bulgarian-controlled Vrhovist committee, which ultimately proved detrimental to Delchev.

The Growth of a Revolutionary Spirit

Delchev’s revolutionary quest for Macedonian freedom grew while studying at the Exarchical gymnasium in Solun (Thessaloniki). Being under the tutelage of Macedonians who taught at the school, Goce Delchev, Gjorche Petrov, Pere Toshev, Dame Gruev, Petar Pop Arsov and others became the future Macedonian revolutionaries of VMRO.

When Goce gymnasium studies, the Macedonians were carried by a feeling of rebellion inspired by the poor condition of the people and their treatment in the midst of the Ottoman lawlessness. Another moment of awakening for the Macedonian students was when they became aware that the Bulgarian propaganda among the Macedonians had different intentions than the liberation of Macedonia.

During an organized visit to the military school in Sofia by students from the Exarchical gymnasium in Solun, Goce became attracted to the idea of acquiring military knowledge, which he thought would help him in his revolutionary struggle. Delchev’s mother used to tell family friends in the village: “They [Goce and his comrades] are in Sofia to study for officers and liberate Macedonia.”

Although Goce Delchev was a student of the Bulgarian military officers’ academy, something which the Bulgarian historiography offers as a fact of his national belonging, he used that opportunity to meet other Macedonians and to spread socialist ideals among the students in general, for which the authorities had him dismissed from the school in 1894, barring him from earning an officer’s rank.

Delchev’s new engagement was a teaching position in Novo Selo, Shtip in the same year, but this time he was armed with the authority to set in motion the Macedonian revolutionary organization after conferring with Kosta Shahov who was one of the founders.

Delchev met with Damjan – Dame Gruev in Shtip in 1884 to discuss the work of the Secret Macedonian Revolutionary organization. In subsequent meetings with notable Macedonians, Delchev was recorded proclaiming that the duty of liberating Macedonia rests in those who have succeeded to raise their spirits higher than the rest.

Upon meeting with Dame Gruev in November of 1894 in Shtip and answering his question why he left Sofia, Delchev had stated:

“Can there be another place for a Macedonian except Macedonia? Is there a people that is more unfortunate than the Macedonian people? And is there a greater field that is fit for work than Macedonia?

We came to Shtip by circumstance. We could have arrived in any other place, but we have to start this sooner than later. We need to illuminate and organize the people, to put it under arms, to instil it with faith in its own power so that people can understand that they can remove themselves from slavery and misery – let’s open their eyes.”

Delchev helped to institute a revolutionary network that provided funding, bought weapons and ammunition and regularly conveyed messages throughout the organization. He was responsible for setting up secret bomb-production facilities in villages around Macedonia.

The revolutionary movement had bylaws which Delchev helped to write to ensure that the komiti are loyal, respectful to the people and serve the organization’s highest ideals. Delchev also wrote letters to notable politicians and people of power across Europe. In 1898 Delchev took to informing the Vatican about the plight of the Macedonians and reversing the decisions that were agreed during the Congress of Berlin, which were detrimental to the cause for Macedonian freedom.

Goce Delchev’s correspondence with the members of the movement shows that he was an irreconcilable optimist, never losing faith even during moments of grave apprehension and pessimism. He advocated for resolving any issues that might arise between the Macedonians internally instead of creating public discord. This further bolstered his image as the Apostle of the Macedonian revolutionary struggle.

Delchev was a thorn in the eye of the Bulgarian government. Secret and overt adherents to the Vrhovist committee sought to prevent his actions and lessen his influence. The biggest blow on Goce’s morale was the second untimely calling for an uprising – the Ilinden Uprising, which he vehemently opposed as he opposed the Gorna Dzumaja uprising.

In his memoirs, Delchev stated: “The Bulgarian government, which has purely expansionist intentions for Macedonia, is keen on using to its own benefit the financial ‘support’ it lends [to the Macedonian revolutionary movement]; Bulgaria is not going to be happy with some platonic feelings [towards Macedonia] but wants real privilege instead… I repeat, the blow is going to be huge.”

The Death of a Macedonian Legend

The Bulgarian army officer Ivan Tsonchev and members of the Bulgaria-aligned ‘Vrhovist’ revolutionary committee have been heard boasting in Sofia that they have “finally got rid of that dog” suggesting they may have played a role in the liquidation of Delchev.

Soon after his killing, the New York Times’ correspondent from Vienna wrote for the paper that Delchev was betrayed by the Turks with the help of a Greek spy. This is a likely scenario because, at the time, Greek antagonism against Macedonians reaches a turning point with the Greek Orthodox Church openly collaborating with the Ottoman authorities against the Macedonian revolutionary movement. 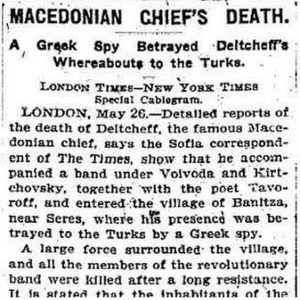 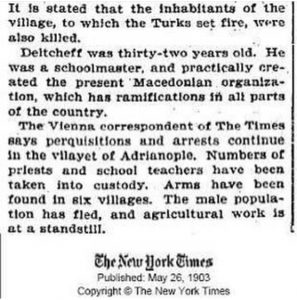 Newspapers from around the world reported on the killing of Delchev and the Macedonian revolutionary movement and Macedonians all over the Balkans were gravely impacted by the terrible news.

The Balkans reporter for the London newspaper Daily News, John Macdonald, wrote: “Delchev was the main organizer – the statesman of the revolutionary movement, he was the idol of the Macedonian peasants.”

The Russian anarchist and publicist Nikolai Rogdaev wrote: “The soul of the Macedonian organization was he – Goce Delchev – he was the Garibaldi of the Balkans, a tireless revolutionary of the people.”

Journey to an Independent Macedonia

Three years following the killing of Goce, his comrades Mihail Chakov and Taskata Serski visited the burial site and dug out his remains. They had them encased in a box that was stowed in the altar of the church in the village Banitsa. During the Balkan Wars, the village had been set on fire three times and the church was damaged in one, however, the box with the remains was spared from the destruction. 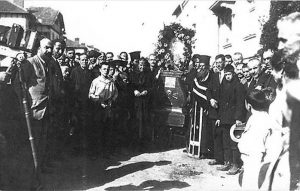 In 1919, Mihail Chakov took the box with Delchev’s bones and keeps them in his own home until 1923. Between that year and 1946, the box stays in Sofia at the Macedonian Ilinden Uprising Organization. The wooden box had been engraved, possibly at Chakov’s bequest, with the words:

The will was accomplished on 11 October 1946 when the bones were carried in a long procession from Sofia through Pirin Macedonia to the church Saint Spas in Skopje. The procession was followed by thousands of Macedonians throughout the route. 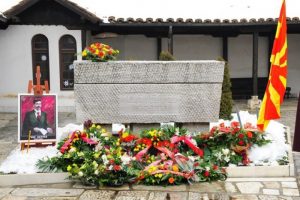