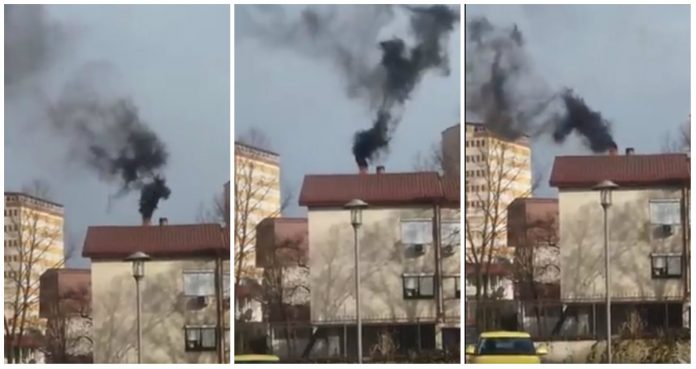 Investigative Reporting Lab (IRL) has implicated a former high-ranking member of the Government for contributing to a business deal that imports EU banned highly toxic fuels used to heat government buildings, factories and seven hospitals around the country.

In its investigative documentary that aired on the Macedonian national TV service on May 16, IRL presents evidence revealing a correlation in the use of the imported low-grade fuel with the level of pollution in several Macedonian cities.

The exposé shows the highly toxic fuel was procured by Evrotim – a one-person company from Kichevo from the biggest supplier of oil products in Bosnia, Hifa Oil.

This company bought the oil from a Czech refinery which has responded affirmatively that the fuel is “refuse” grade.

According to EU rules and regulations regarding “refuse” – the burned-over oil is highly toxic and may only be used by large thermal plants and open-sea freight carriers.

In Macedonia, this type of oil was used to heat hospitals, the building of the Defense Ministry, the offices of the national railroad company, the smelter Feni Industry (renamed Euronikel) which is one of the biggest polluters in the country and BRAKO, among others.

The expose continues, that this was possible thanks to a deal that was concluded inside the government building by the director of Evrotim from Kichevo, the owner of the Bosnian Hefa Oil and Kocho Angjushev – then Deputy Prime Minister for Economy owner of the technological concern BRAKO in Veles.

The deal brought Evrotim profits of 18 million euros in two years. Its biggest purchaser is Euronikel (Feni Industry) which uses the greatest amounts of fuel sourced by Hefa Oil.

Stojko Paunovski, who was recently discharged from his position as Director of the State Inspectorate for Markets by Zoran Zaev’s Government, spoke to IRL’s journalists, revealing that the use of the type of fuel which is illegal in the EU, is overlooked by state institutions.

Due to systemic loopholes, importers can sell lethal oil to Macedonian companies and institutions, like hospitals and government ministries, can burn the cheap oil to heat buildings. Industrial facilities, like Euronikel, BRAKO and others, can use the oil unabated.

Even though Paunovski’s inspectorate informed the Minister of Economy about the issue of documentation that enables refuse oil to enter the country, Minister Kreshnik Bekteshi did not act on the matter during government meetings.

IRL explain that Hifa Oil may be sourcing refuse fuel from multiple countries around the EU where use of oil containing more than 1% sulfur is forbidden.

The Macedonian environmental inspectorate performs tests that control only for the level of sulfur, disregarding metrics for the levels of other toxic substances.