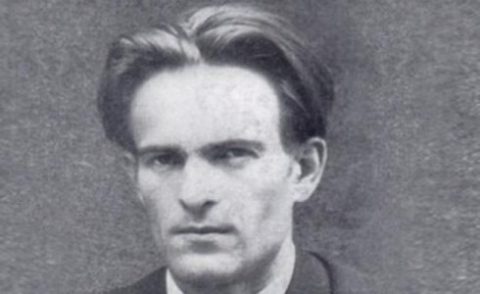 Nikola Jonkov Vapcarov was one of the greatest Macedonian poets of the older generation, a patriot who contributed to the saga for independence by organizing the Macedonian Literary Circle in Sofia.

The literary circle has a notable place in the history of the Macedonian people. Vapcarov’s circle, which included Kole Nedelkovski, Anton Popov, Angel Dinev, Mihail Smatrakliev and others, was a continuation of the tradition of Macedonian literati who supported the struggle for independence and unification.

Vapcarov was born in Bansko, in the Pirin part of Macedonia which was carved out for Bulgaria at the Treaty of Bucharest in 1913.

Nikola’s father, Jonko, took part in the revolutionary struggle against the Ottoman Empire. He was part of the Ilinden uprising in 1903 and in the period leading up to the Balkan Wars and during these wars, he was sucked into the factional strife between the different political currents of the Macedonians.

Nevertheless, Nikola absorbed strong feelings for Macedonia and its freedom from his father. It can be argued that he was able to see clearly through the artificially-created intolerance between the Macedonian factions which had spilled over into a murderous rampage for decades.

Instead of fighting for Macedonia with weapons, he took the road of an ideological revolutionary. Nikola raised himself in the spirit of empathy.

When he was a child, Nikola Jonkov Vapcarov had witnessed a column of Serbian prisoners who were taken through the village Dobrinishte. Upon learning that the men were being taken away towards a dreadful fate, he said to his grandmother Milana that he will liberate them when he grows big and strong.

His emotive nature followed him throughout his life. The collection of 20 poems which he titled Motorni Pesni (Songs of the Machines) have a socialist undercurrent.

Vapcarov was responsible for organizing a workers revolt at a factory after the owners had closed it, laying off all of the people. The owners reopened the factory, but the government had learned about his involvement and made sure that he gets fired.

Vapcarov’s wife, Bojka, who was the daughter of Macedonian refugees from Aegean Macedonia, notes in her memoirs that Nikola fell gravely ill at the same time when their child passed away. He and his wife were able to survive thanks to financial help from their friends.

The latter period of his life was marked by his involvement in workers rights movements and the communist party of Bulgaria. He participated in sabotages and intelligence actions targeting pro-fascist groups.

Nikola Parapunov, a Macedonian from the Pirin region and a communist partisan in Bulgaria, invited Vapcarov to join the executive branch of the workers’ revolutionary movement.

Vancho Mihailov, the Bulgarian fascist and terrorist who was born in Macedonia to parents from Moskopole, Albania, had organized an unsuccessful assassination on Vapcarov. This took place after the fact that Vapcarov did not stop his pro-Macedonian and communist activities after he was severely beaten by Mihailov’s thugs.

The Bulgarian fascist regime captured Vapcarov, another Macedonian – Anton Popov, and several Bulgarian communists and sentenced them to death.

On 23 July 1942 Vapcarov was taken in front of a firing squad and executed.

Nikola Jonkov Vapcarov had spent most of his life in Bulgaria, but where his heart and mind were can be seen from his poem Zemja – Land.

Although Vapcarov expresses a singular patriotism for Macedonia and declared himself as a Macedonian, he was a citizen of Bulgaria and not without surprise, the modern Bulgarian historiography claims Vapcarov was an ethnic Bulgarian.

The emotions that he expressed in one of his most touching poems, Zemja – Land, speak to the contrary.

The land that I am now walking upon
A land that is steeped in spring,
woken by winds of the south
This land isn’t mine
Forgive me – to me, this land feels foreign.
I depart in the morning
For the factory road.
Countless stained shirts
Are streaming in at once.
We are all one
One at hand, one in the mind
But not this land, I can’t feel it is mine.
Above my land, there is the bliss of rays
And thundering waterfalls
Coming from the sun above.
You can feel it deeply
The land is dear to you
As you gaze on in earnest
at the countless springing flowers.
Above my land, the skies are high above the Pirin
The pines are in storm
While the songs of Ilinden are echoed.
Above Ohrid, the heavens are infinite and blue
And below even yet
Shines the bright coast of the Aegean.
I shall mention these
And my blood burns in a moment
My heart beats gently
As it melts in a kind of lovely tenderness.
O land of my birth!
Beautiful land.
Fed with blood
Rocked by storms.