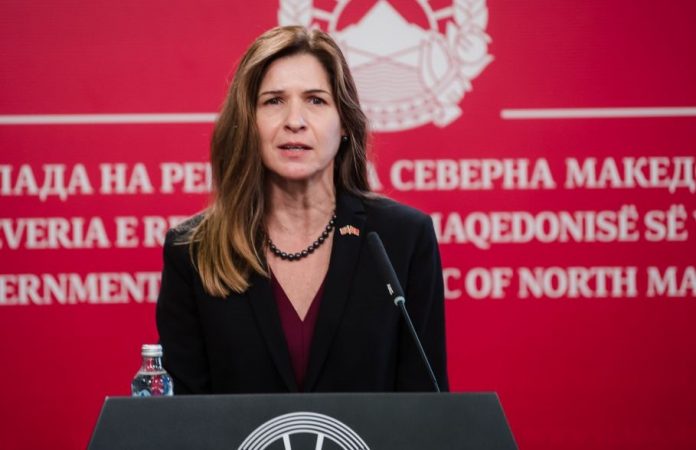 US Ambassador to Macedonia, Kate Byrnes, slated an increase in US involvement to overcome the de-blocking of Macedonia’s EU path during a news conference following the signing of a Memorandum on a trilateral project to promote digitalisation in Macedonia today.

“We see the Macedonian future in the European Union and reaffirm the importance of resolving the issues and hope that it will continue until the end of the year, we continue talks with all partners, talks with the Government here in Skopje, talks with neighbouring countries and throughout Europe to make sure we do everything we can to support the process moving forward”.

“I have no concrete announcement at this time except to confirm that the United States will be involved in this issue and in the talks because we all share the same vision of Northern Macedonia taking its rightful place in Europe and the EU and we hope it will be soon,” said Byrnes.

The US was a critical factor in the signing of the Prespa Agreement which saw Macedonia going beyond Greece’s original demands of a name change to include Macedonian concessions towards its own identity, history and human rights of the Macedonian people.

Bulgaria breaks its own Agreement

Relations with Bulgaria had shifted after it violated Article 2 of the Good Neighborly Agreement, which says Sofia would help us on the European path, said Nikola Dimitrov.

“It pushes us away, and at least it will block us. On the contrary, we received two vetoes and problematization of the Macedonian language”. According to Dimitrov, there is no progress in an atmosphere of blackmail and mutual trust and respect are needed for progress in the dialogue on all issues.

“In principle, the Friendship Agreement with Bulgaria was for governments, political leaders to deal with the present and the future, and historians to deal with history. What politics can do is create a favourable climate – for societies, academia, members of the Commission on Historical Development to talk freely and openly. We experienced two vetoes, we also experienced the problematization of something that is very internal, our language – the Macedonian language at the European level and in that sense these steps made the real honest dialogue very difficult.

“That is the main problem at the moment. We will continue to strive to solve that problem”.