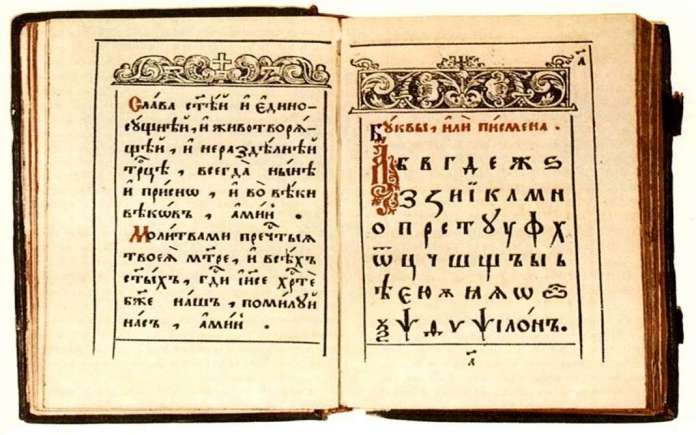 Jasminka Pavlovska of the Macedonian daily newspaper Nova Makedonija reports a finding that attests to the deep and unique roots of the modern Macedonian language.

Namely, a textbook primer from the year 1597, printed for the learning of the vocabulary of Old Slavonic, which was the language of the Church and clergy, contains a letter that is unique to the Macedonian language and alphabet.

The letter which in Macedonian Cyrillic is written as S and pronounced as ‘dz’ has prominent use in the Macedonian language, but it is absent from Serbian and Bulgarian.

Interestingly enough, the letter Dz is prominent in words that are almost exclusive to Macedonian.

In the centuries-old book for the learning of the Old Church Slavonic language, the letter S – Dz is represented by the graphem „ꙃѣло” which was pronounced dzjalo and stands for se/sve – the word for ‘everything’, which has its cognate in the word ‘swa’ in Sanskrit, the ancient language of northern Indian subcontinent.

According to Ljudmil Spasov, linguist at the Saints Cyril and Methodius University in Skopje, the letter S – Dz had formed in Macedonia due to linguistic contact with the Romance group of languages – Latin during the Roman past, Italian during the middle centuries, Albanian (Albanski ne e Latinski jazik) and Vlach.

Another language belonging to the Slavic group where S- Dz has its own letter is Ukrainian, and this, according to Spasov, is due to influence from Romanian.

The professor explains that the influence of southern Italian dialects on the Macedonian language came through trade relations between Macedonians and traders to the west of the Balkans.

Venice is noted as the primary center in the trade relations between the West and Macedonia, Epirus, Dalmatia and other Balkan regions. Perhaps this is one of the reasons why the book that contains the letter S – Dz was printed in Venice.

The book was found in the Visoki Dechani monastery in the town of Pech in Kosovo, a region which has been part of a wider area under the influence of the Macedonian Christian school and with that, trade and cultural relations.

One of the connections between the Macedonian cultural influence and the region of Pech is Pjeter (Pietro) Bogdani (1656 – 1671) who is considered to be author of the first original text in the Albanian language.

Bogdani, who was born in Prizren on Kosovo, not far from Pech, was the bishop of Skadar (Shkodra) in Albania and later became the archbishop of Skopje. The monastery of Pech fall under his jurisdiction, despite Bogdani’s connection with the Roman Catholic church.