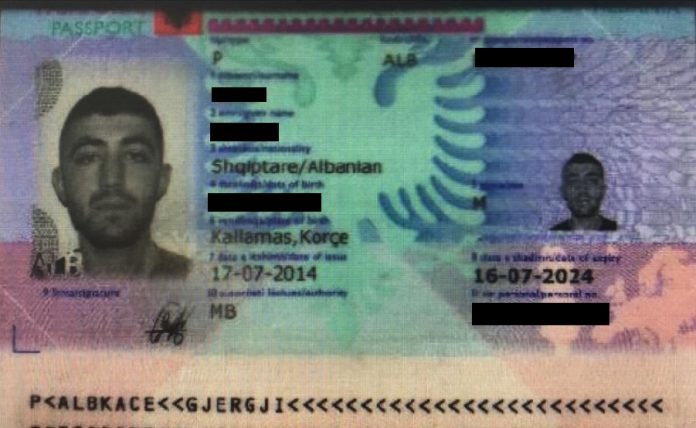 Macedonia’s Minister of Interior Oliver Spasovski held a live webcast on Tuesday night informing the public about the police action that resulted in the arrest of employees of the ministry accused of issuing alternative identities to more than 214 high-risk foreign nationals.

Among the owners of official Macedonian passports and national ID cards with false names and stolen identities are bosses of notorious criminal gangs. A single passport could cost as high as 20,000 euros.

Some of the individuals have international arrest warrants for murder, racketeering, extortion and drug trafficking among other illegal activities.

One of them, Jovan Vukotic, head of a Montenegrin drug clan, was able to travel to at least five different countries with his Macedonian passport. The Macedonian authorities have digital evidence of all inbound and outbound nationals.

Nine individuals working for the Ministry of Interior were followed since at least early 2019. The colluding group includes Macedonians, Albanians and Bosniaks, both males and females.

Details from the investigation reveal that those who were part of the scheme were able to purchase luxurious vehicles and real estate property thanks to the proceeds obtained through the criminal activity.

A tenth person, who acted as middlemen between the purchasers of IDs and passports and the group within the police, is on the run.

The case code-named “Mafia” can have serious domestic and international implications for Macedonia, so much so that it has become a political scandal that is going to dominate the period ahead.

SDSM and VMRO have exchanged serious accusations over the past two days.

The police action took place one day after the main opposition party VMRO named the specific police station that issued the documents.

On Tuesday, the head of VMRO Hristijan Mickovski directly accused SDSM of siding with the criminal underworld. Prime Minister Zoran Zaev and Interior Minister Oliver Spasovski were accused of complicity.

Macedonian newspaper Vecer addressed a set of questions to the Interior Ministry and the office of the public prosecution, including whether they are aware of a case documented by photos and video where a group of drug dealers from Macedonia traveling in a Government-owned Volkswagen Passat to Albania and from there to Europe and Colombia to arrange the purchase and delivery of cocaine.

Vecer also poses the question of whether individuals of the same group have relations with a high-ranking functionary of DUI who is part of the top of the executive Government.

Mickovski stated the scheme couldn’t have gone on for that long without the awareness of the Government.

SDSM accused VMRO of trying to sabotage the police action by stating one of the three offices under the Ministry which participated in the scheme, as well as the names of some of the criminal bosses who had obtained Macedonian documents.

According to Oliver Spasovski, the action was planned days in advance. He accused Mickovski of endangering the result of the investigation and the efforts of the Macedonian services and those of Interpol and the United States Drug Enforcement Agency (DEA).

Spasovski was countered by Nake Chulev, who was the VMRO interim Minister of Interior in the period leading to the previous parliamentary elections and had details about the investigation.

Chulev said in a statement that it took SDSM four years to finally act on operative data which was obtained with the help of Interpol and the US DEA. According to him, the investigation was near-completed when he stood at the head of the Interior Ministry.

Mickovski said that the VMRO briefing caused the Government to wake up from its winter dream. “If this was a sabotage,” he quipped, “then let’s hope that we can have many more ‘sabotages’ in order to get them to do work.”

Spasovski appeared in a interview on for news portal Sloboden Pechat where he stated that Hristijan Mickoski has had frequent and at times daily contacts with one of the Ministry’s employees who were arrested on Tuesday night.

Among the accused criminals are several high-profile cases.

One of them is Jovan Vukotic – the leader of a notorious drug trafficking clan from Montenegro who is accused of organizing the public liquidation of rival bosses in an Athens restaurant.

Another Macedonian passport holder is Sedat Peket – convicted criminal from Turkey who was seen walking in Skopje surrounded by an entourage of 20 men. Peket is accused of aiding the 2016 coup attempt against the Turkish government.

As a NATO member state and EU candidate, Macedonia will find itself under serious scrutiny following the case. The country has sunk at the lowest point on the scale of corruption and registered unsatisfactory rankings for its level of democracy.

Spasovski called a police raid at the end of March a success, although two drug-dealing gangs where arrested,the gangs leaders escaped. The action failed due to a tip-off from inside the police, said public prosecutor for crime and corruption Vilma Ruskovska.