Tobacco Growers Feeling the Crunch of a Low Purchase Price 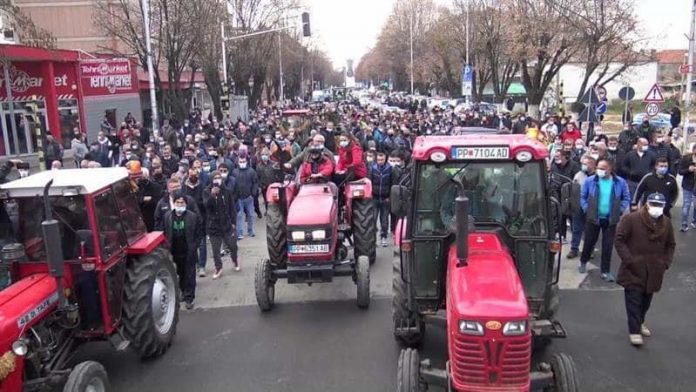 In 2020 Macedonian tobacco producers are facing one of the toughest years they can remember. At the protest that took place in Prilep, the country’s tobacco center, the producers argued against the purchasing price for a kilogram of tobacco, which they say costs as little as a pack of cigarettes.

Tobacco is one of the mainstays of the economy of the Pelagonia region. Macedonian tobacco has been renowned since Ottoman times when the product was loaded on rafts to sail on the Vardar river to the port of Salonika from where it was shipped to its buyers.

All of this is taking place at a time when the government is giving an unprecedented attention to cannabis. Few privileged domestic growers have built large facilities in an industry that is allegedly held by family-owned businesses close to the Prime Minister Zoran Zaev. While the government is planning to decriminalize and potentially legalize cannabis, thousands of tobacco growers and their families are facing crisis due to the low prices that are dictated by the industry’s buyers.

The wholesale purchase price of tobacco can’t cover the expenses, say producers of the Pelagonia region who occupied the city’s center with tractors and cars. The buyers cite lower than the usual quality of the tobacco as the reason for the lower purchasing price, however, the producers say this simply isn’t true.

The price varies at around 100 Macedonian denars, which is roughly $2.00 USD or $2.5 AUD, depending on the class and quality. The protesters demand that the government arranges for a guaranteed purchasing price of around 200 denari which is $4.00 US or $5.30 AUD.

The Prilep-based news portal InfoKompas states a claim by tobacco growers that in the previous years the buyers had purchased around 10 million kilograms and thus far in 2020, they have only sold 250,000 kilograms.

The weak purchase hurts those who make their living from agricultural produce and tobacco, who say that 2020 has been a disastrous year. With expenses per kilogram higher than the price they get at the buying points, many families are facing difficulties in the time ahead.

Attendants at the protest announced that there are going to be more gatherings in other tobacco-growing regions in the country, including Bitola, Strumitsa, Veles and Kavadartsi.