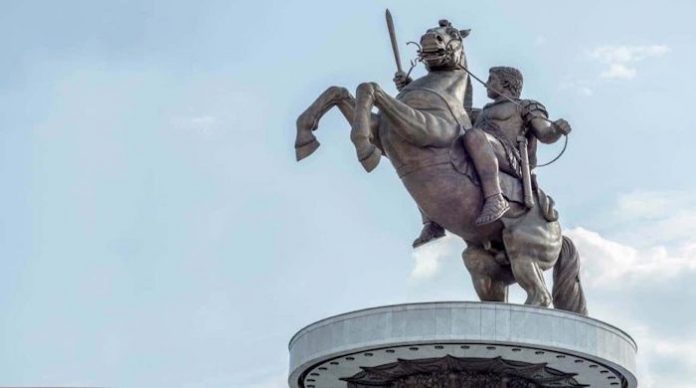 On December 2 Shilegov mentioned a plan to build a “memento park” located at garbage site in Gjorce Petrov where he plans to move the majority of the bronze sculptures of historic figures relevant to Macedonia, spanning from antiquity to the modern period. The move is divisive and adds to further tensions in a very sensitive period in Macedonia’s history during which the ethno-national identity of the Macedonian people is under serious threat with daily protests occurring around the country.

As previous threats to dismember the statue of Alexander the Great where met with organized patrols to protect it, actual moves to dismember or relocate historic monuments from the city center have the potential to cause conflict.

Under Shilogov the City of Skopje considers the Skopje 2014 monuments illegal, with only Macedonian monuments targeted, Albanian statues such as Skanderbeg, UCK and fascist collaborators are to remain in place.

One of the most vocal opponents of the Skopje 2014 project is architect and former mayor of the Centar municipality Miroslav Grcev. While acting as mayor Grchev oversaw uninhibited violations of the building code, allowing the historic Debar Maalo neighborhood to become choked with tightly-knit multi-story buildings.

The architect and designer of the current Macedonian flag that replaced the original 16-ray sunburst flag has said he wants some of the Skopje 2014 monuments melted and recast in the busts of historic figures from the WW2 and communist eras whose bronze busts were stolen over a period of 20 years.

Both Shilegov and Grchev have cited the example of Hungary where communist-era monuments, such as those of Stalin, Soviet Soldiers, Marx and Engels, have been relocated to a “park of memories” in Budapest.

Members of the City Council who belong to VMRO-DPMNE say that the Government is prepared to wipe out the history of the Macedonian people. The removal of the monument of Andon Janev – Kjoseto is one example. Kjoseto is known for executing Macedonians who were accused of supplying the Ottomans with the whereabouts and plans of the Macedonian Komiti revolutionaries.

The plan to remove monuments doesn’t come as a surprise due to the suspicion that some of the historic figures are part of the bargain in the talks between Macedonia and Bulgaria. One example is the statue of Tsar Samoil whom Bulgaria considers as one of its rulers.

While only Macedonian historic figures are targeted, Shilegov stated that he wants to relocate monuments in order to demonstrate that the City of Skopje has sensitivity to its residents who belong to different ethnic groups. Shilegov made the following statement:

“We have to be careful not to cause a new revolt in society. The Macedonian society has serious divisions and we have to be careful with the moves that we make; we should have mutual respect… The center is unlike Skopje as a city. It has never been and it is not going to be that.”

The government has not mentioned the possible removal of monuments of Albanians who collaborated with the troops of fascist Italy and Nazi Germany in Macedonia that resulted in the murder and expulsion of thousands of Macedonians.