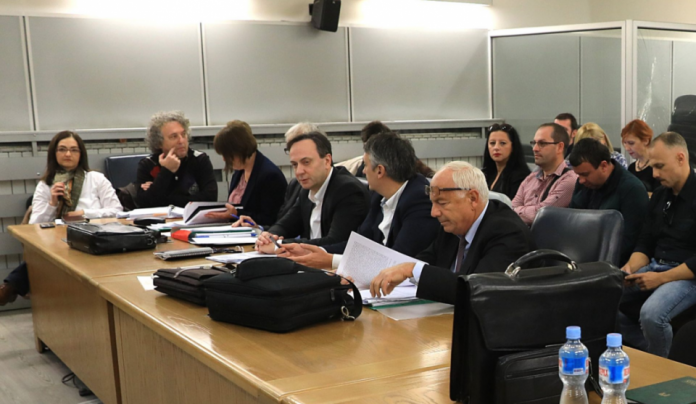 Three judges from the Basic Criminal Court in Skopje sentenced the former chief of the Macedonian intelligence services Sasho Mijalkov to 12 years in jail for running a massive, unauthorized eavesdropping scheme that had captured the telephone conversations of more than 20,000 people.

Mijalkov’s targets were former and current politicians, members of the Macedonian civil society, private individuals and journalists who openly criticized the government and high-profile members of political parties, including Mijalkov’s own VMRO-DPMNE.

The court gave the highest possible sentences to Mijalkov’s former deputies from the Administration for Security and Counter-Intelligence (UBK), Goran Grujevski and Nikola Boshkovski. If they are extradited from neighboring Greece, where they had escaped in July of 2017, Grujevski and Boshkovski will face 15 years of jail time.

Former Prime Minister Gruevski has been issued political asylum in Hungary and UBK exiles Grujevski and Boshkovski have requested asylum in Greece due to the likelihood of not receiving a fair trial at the hand of the Macedonian courts. According to reports, it is expected that Greece will grant them asylum.

Gordana Jankulovska, the former Minister of Interior was given a four-year sentence for signing the orders for the hurried destruction of the eavesdropping systems.

Seven other individuals who were part of the eavesdropping scheme that produced the leaked telephone conversations which ultimately brought down the government of Nikola Gruevski, were given sentences between two and six years.

This may not be the final epilogue of the case Target-Tvrdina. The indicted have the right to appeal the sentences which are based on evidence obtained by forensic research and a broad police investigation that lasted since March 2016.

The illegally recorded conversations, popularly referred to as “bombs”, were released by Zoran Zaev in his attempt to bring down Nikola Gruevski’s popular government. It is generally believed that Zaev had obtained the trove of recorded phone calls from the former head of intelligence Zoran Verushevski and two whistleblowers, Zvonko Kostovski and Gjorgi Lazarevski, who were called as witnesses during the trial.

In a leaked video recording during a conversation between then Prime Minister Nikola Gruevski, Zaev admitted that the recordings where obtained from a foreign intelligence agency which contradict the court verdict.

Nevertheless, according to the charges by the prosecution, Mijalkov, Grujevski and Boshkovski formed the core group that had solicited compliance from other employees in the intelligence apparatus. Together they monitored and kept records of 4,286 telephone numbers without first obtaining warrants from the court.

The scheme began to untangle when Gjorgi Lazarevski, an officer in the intelligence agency, noticed that a long list of telephone numbers slated for monitoring was not matched with the required documentation which is given by court order.

Lazarevski had accessed a comprehensive telephone database that was available to the agency and concluded the systems are eavesdropping on telephone communication of people who work in the police, army, politicians, high-profile names from business.

According to prosecutor Lenche Ristovska, Lazarevski didn’t act on his findings, however, later in 2010 another witness, Sasho Trajkovski, came to the same conclusion as his colleague. Lazarevski then talked to another officer, Zvonko Kostovski, who had agreed to remove files from the hard drives.

To do that, Lazarevski devises software enabling him to access the content of recorded SMS messages and audio files.

Kostovski began to take out files from the database from 2011 to 2013, storing his cache on DVDs which he hands over to Gjorgi Lazarevski.

According to the prosecution, in 2014 Zaev met with then Prime Minister Nikola Gruevski, telling him about the eavesdropping scheme and Gruevski responds by initiating the “Putsch” investigation in which Verushevski, his spouse, Zaev and others are suspected of espionage of high organs of the government.

The ensuing political crisis plunged the country in a security crisis which culminated in foreign backed, anti-government protests supported by international groups and attacks on police.

Events taking place in an ethnic Albanian suburb of Kumanovo between May 9 and 10 in 2016 was the climax of VMRO-DPMNE’s 12-year long rule and the subsequent wrestling of power by SDSM, in coalition with DUI. The “Divo Naselje” shootout between Macedonian security forces and former Kosovo Liberation Army paramilitaries resulted in eight casualties on one side and ten on the other, with no civilian deaths.

When SDSM ascended to power, the Special Public Prosecution began processing the recorded conversation “bombs” in order to glean information on which to charge the suspected VMRO party members, politicians and an array of government employees participating in illegal activities.

Once the Special Public Prosecution body was dissolved due to corruption of its prime prosecutor Katica Janeva, the State prosecutor took over and continued the trials of Gruevski, Mijalkov, Jankulovska, Minister of Infrastructure Mile Janakievski and others.

Mijalkov had maintained his innocence throughout the trial. He claimed to have rarely used the computer during his nine-year tenure in the intelligence body, specifying he does all tasks such as email communication from his mobile phone.

Mijalkov’s defense provided the prosecution with a report by renowned Israeli private telecommunications and cybersecurity company, according to which the conversations were recorded by a third party, unaffiliated with the government or the intelligence services. This was the last line of defense on the part of Mijalkov. A rebuttal by a cybersecurity and telecom expert has led to his subsequent sentencing about one month later.

Mijalkov has been placed under arrest and is expected to be processed to a jail in Skopje. Target-Tvrdina was the first case where a public figure is tried for illegal wiretapping. Allegations in 1992 and 2000 implicated former ministers and members of the governments of SDSM and VMRO respectively.

The telephone conversation “bombs” that were both illegally recorded and illegally taken out of the systems in possession by the Administration for Security and Counter-Intelligence (UBK) were used to decisively target VMRO party members.

The circulating of conversations involving Zoran Zaev and DUI party members, leaked to the public since SDSM/DUI assumed power, implies that illegal wiretapping is still used as leverage by unknown groups and interests.