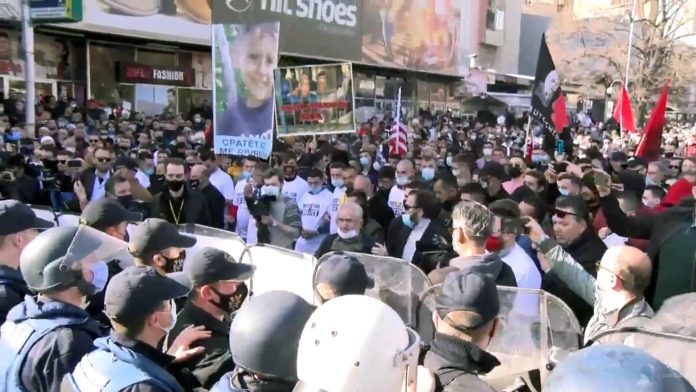 A crowd of several hundred protested the jail sentences handed down to a group of ethnic Albanians for terrorism in Monster case today. The protestors had a brief but intense clash with the police.

The protest was announced following the court’s verdict against the five individuals who were found guilty of the Good Thursday terrorist killing of five ethnic Macedonians.

The protest started off calm with Albanian, US and Greater Albania flags displayed. A group began throwing rocks at police cordons who blocked their way from advancing to the city center.

Injuries have been reported on both sides. The police resorted to deploying shock grenades when the belligerent group refused to back down.

Two members of the political parties Alliance of the Albanians and Alternative attempted to calm the tension. Rexhep Skenderi and Elmi Haziri asked the protesters to stop engaging with the police while encouraging them to continue seeking justice and eventually reach the destination of their protest: the courts, the national assembly and the government.

“Their purpose is to have the Albanians locked and we are not going to allow that. We will help you turn back the demonstrators. Schedule another protest and we are going to be there,” spoke Rexhepi.

A number of protesters attempted to negotiate with the police demanding it should turn back and leave, after which the crowd will disperse. The cordons stood their ground resulting in a barrage of projectiles.

The case Monster comes from a dark event in the consciousness of the Macedonians and Albanians, which led to two trials and jail sentences to a group of convicted terrorists.