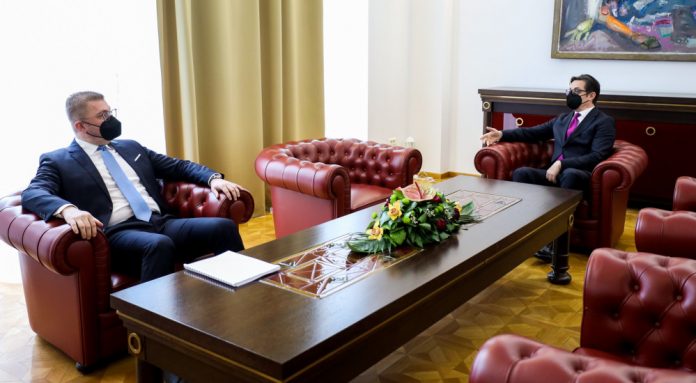 Macedonia’s President and opposition leader have agreed for the need for retrial, should there be new evidence for the 16 individuals who received draconian jail sentences for their role in the entering of Parliament on April 27, 2017.

Stevo Pendarovski and Hristijan Mickoski arrived at this conclusion following their first meeting in nine months which lasted an hour at the presidential residence in Skopje on Friday.

Mickoski, who gave his support for the recent protest demanding justice for the “defenders of the constitution”, stated following the meeting that he is not demanding amnesty but justice.

Mickoski has maintained that those accused of “endangering the constitutional order of the state by means of terrorism” should serve sentences according to their particular offenses.

Pendarovski has stated recently that the events in parliament did not amount to terrorism and retrials should be considered if there is a legal basis for it, such as evidence that hasn’t been presented during the trials.

Leader of DUI, the Albanian coalition partner in the Macedonian government, Ali Ahmeti agreed that those convicted are not terrorists, “The event (April 27) is sick, there was an attack on elected officials with some brutality but it was not terrorism. Everyone knows what terrorism is and what qualifies for terrorism.”

The meeting between the President and the opposition leader can be seen as reset of relations between VMRO and the institution of the President, which has degraded to a full freeze which lasted nine months.

Pendarovski and Mickoski announced there will be subsequent meetings in which they will discuss matters that are crucial for Macedonian citizens.