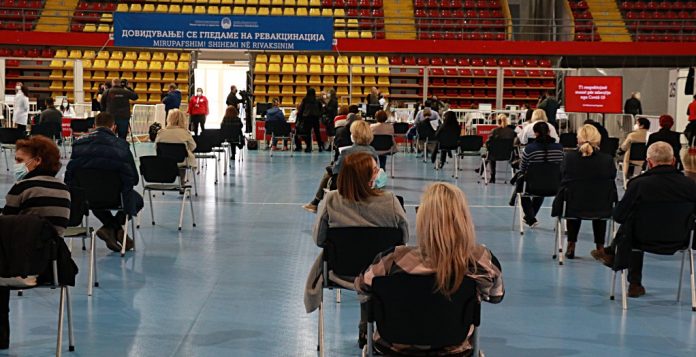 While the daily number of covid positive results has dropped, the death rate remains high as the Macedonian Ministry of Health has begun a new phase in the anti-covid vaccination effort as 200,000 Sinofarm vaccines arrived Tuesday.

According to reports from the ministry, the total number of people who have received the vaccine in Macedonia is 105,000.

By the end of Thursday, 7,963 people received their first shot and 1,160 went for their second. A total of 20,650 individuals have received two doses.

Following widespread public outcry in February caused by the government’s failure to secure vaccines, the months of April and May saw an improvement.

China delivered 200,000 doses Tuesday which have allowed the authorities to fast track the vaccination process. Health workers have been administrating anti-covid vaccines from Sinofarm, Sputnik V, Astra Zeneca and Pfizer.

On Thursday, Prime Minister Zoran Zaev received a vaccine shot from Sinofarm in the vaccination facility at the Boris Trajkovski sports arena in Skopje.

An upward trend has been noted in the number of registrants for the vaccine. The vakcinacija.mk platform started out slowly but from the moment of this writing, more than 256,200 individuals have signed up to receive immunization.

There is also a negative trend in the number of new covid cases. Following a disastrous wave in February and March, lasting through early April, the total number of hospitalized patients with the virus has dropped to 883 as of today.

Also, there are fewer positive cases and fewer deaths compared with the months stated above. Health clinics around the country have 847 free beds at their disposal.

Macedonia faced multiple challenges in acquiring vaccines during a period of uncertainty that gripped most of Europe. Experts in the field have claimed that the summer months should see a dip in the number of new cases.

Based on the positive outlook, the government is preparing to relax some of the measures in order to restore the economy – especially the tourism, hospitality, restaurant and events industry.

The curfew which started at 8 PM and lasted through 5 AM during April has been lowered. According to the revision, people have to be in their homes by 23 PM until 5 AM the next day.