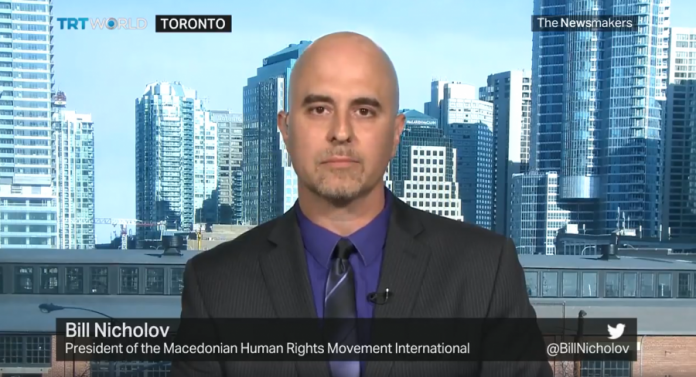 The president of the Macedonian Human Rights Movement International, Bill Nicholov, has met with the European Office director of Amnesty International to discuss the unprecedented denationalizing attack against Macedonia and the Macedonian people over the past three years, which began with the changing of the country’s name into North Macedonia.

Bill Nicholov has asked Nils Muiznieks and his colleague, European Office Researcher Jelena Sesar, to denounce the acts that have resulted in the name change and forced concessions from the national historic identity, which are human rights violations that go against the UN Charter on Human Rights.

Nicholov has pointed out to Amnesty International’s Europe office that Macedonians in neighboring countries face challenges that prevent them from freely promoting their ethnic identity, language and culture. According to Nicholov, this is especially true for Macedonians living in Greece and Bulgaria.

MHRMI’s president reflected on how the international coercion that forced a formal identity change on Macedonians has reflected inside the country.

Nicholov conveyed to Muiznieks and Sesar the following:

[Prime Minister]Zaev has taken brutal action against those who are critical of his policies, including: imprisonment of dissenters; ordering riot police to beat and arrest peaceful protesters; firing (from public and private sector jobs) of thousands of Macedonians; shutting down media and imposing prison sentences for journalists; blocking social media access for individuals and media outlets; outlawing and criminalizing the use of the term “Macedonia”; the investigation and intimidation of Macedonian civilians including physical attacks and arson; and the continued unlawful detention of Macedonian political prisoners who are subject to abhorrent prison conditions.

The full press release by Macedonia Human Rights Movement International can be read on the organization’s website.