Former intelligence director presents himself to court after disappearing for days 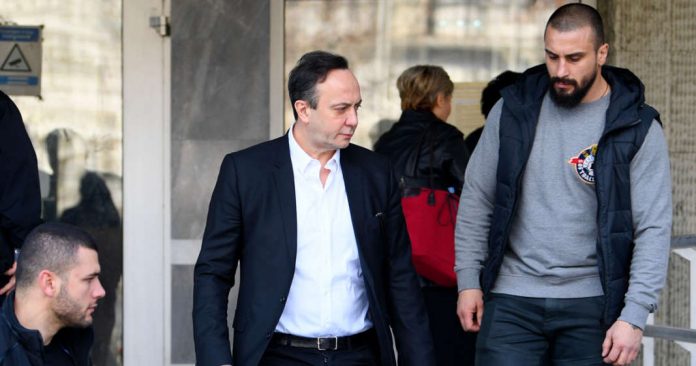 The former director of the now-dissolved National Agency for Counter Intelligence, Sasho Mijalkov, has presented himself to the prosecution after disappearing since Sunday night.

Mijalkov caused a media whirlwind when he disappeared with the US State Department and Interpol both weighing in on what was a suspected escape from the country.

Mijalkov was officially reported missing by police on Monday morning and now claims he was unwell and in isolation.

Suspicion revolved around the likelihood of an escape based on a precedent set by his cousin and former Prime Minister Nikola Gruevski, who escaped to Budapest days before a court hearing that delivered a prison sentence. He received a two-year jail sentence for the unlawful procurement of a state vehicle.

Two of Mijalkov’s colleagues, Goran Grujovski and Nikola Boshkovski, who are also accused in the case Target-Tvrdina, have already escaped to Greece whose authorities are unwilling to extradite them citing as a reason the likelihood of their not receiving a fair trial in Macedonia.

In a telephone conversation that was leaked recently online, Zaev tells Aleksandar Verushevski who is the son of former intelligence chief Zoran Verushevski, that he and Mijalkov had been in contact concerning the 2016 elections.

Zoran Verushevski is the likely owner of a trove of recorded telephone conversations that helped SDSM bring down the government of Nikola Gruevski where Sasho Mijalkov played a highly prominent role.

Mijalkov had assumed the role of a contender for power against the current establishment of the opposition party VMRO, which is headed by Gruevski’s trustee Hristijan Mickovski. It has been alleged that a group of party members striving to unseat Mickovski from the role of VMRO President has been supported by Mijalkov himself.

In a video interview for TV station Alsat-M in January 2019, Zoran Zaev claims that Mijalkov had pressured VMRO MPs to cast their votes in favor of the decision to change the name of the country into North Macedonia.

Over the course of the past year, incognito VMRO supporters on Twitter and Facebook have been accusing Mijalkov of working to weaken VMRO, in favor of SDSM, as the opposition party has made strides in galvanizing popular support against the population census, the talks with Bulgaria and few other hot issues stemming from the politics of SDSM.

Questions began to be raised over Mijalkov’s escape as early as Monday afternoon. By Monday morning there is a clear timeline of events that may have aided the conditions in which the ex-head of national intelligence was able to slip out – then re appear Tuesday afternoon.

According to an exclusive statement made by organized crime prosecutor Vilma Ruskovska for the news portal SDK, the prosecutor had informed the Ministry of Interior as early as Friday, February 19 that the main court proceedings for the case in which Mijalkov is implicated have been concluded.

On the next day around 12:30 PM, prosecutor Vilma Ruskovska called Interior Minister Oliver Spasovski to notify him of having received unconfirmed information from a personal source that Mijalkov is going to escape.

On Sunday around 22:30 PM, the prosecutor received a notification in which the Ministry of Interior simply reported the same information back to Ruskovska – that Mijalkov is preparing an escape.

The next day is marked by an attempt for expedited processing of a measure for house arrest for Mijalkov which would have enabled the police to act within the perimeter of the locations that are most often frequented by Mijalkov – the Mariott Hotel which he owns and had made his legal address of residence and his home on a Vodno street.

The prosecutors in the case Target-Tvrdina had received a revised decision for house arrest and 24-hour audio and visual supervision of Mijalkov in 6:45 PM – five hours after the request was filed. According to her statements, Ruskovska had called the judges to inquire why the prosecutors haven’t received the decision yet.

Between 18:45 PM and 21:20 PM – the time when the police tried and couldn’t reach Mijalkov at his home address, the prosecutors had been in frequent contact with the authorities who reported they have visual contact with the person of interest.

On Monday night the police questioned Mijalkov’s son Jordan for eight hours. His brother and wife were summoned for questioning, as well as members of his personal security detail.

According to unconfirmed reports, Sasho Mijalkov successfully made an escape to Greece where the authorities have the whereabouts of two fugitives and former intelligence agency officers Goran Grujovski and Nikola Boshkovski, also implicated in Target-Tvrdina. Other reports point to him hiding out in a embassy of a foreign county in the capital. Whether Mijalkov went to Greece and came back is uncertain – what’s certain is the inability of the state institutions to go their job in securing his whereabouts.

Organized crime prosecutor Vilma Ruskovska stated that Mijalkov’s Macedonian passport has been confiscated which increases the likelihood he either used his Czech passport or that issued by another country, if he has indeed left the country at all.

Meanwhile, Prime Minister Zoran Zaev explicitly stated that there is “no political agreement” between him and Mijalkov that would have enabled the latter to escape. The spokesperson of the opposition VMRO has demanded the resignation of Interior Minister Oliver Spasovski.

Mijalkov will be sentenced for this case in Friday, February 26. He is implicated in five other cases for which it is speculated the court has set a prison sentence of between 12 and 14 years.