Academy president against the posthistoric negation of the Macedonian people 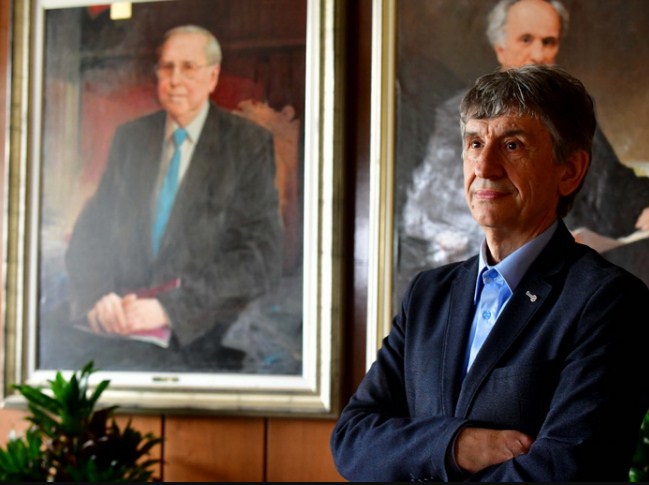 The President of the Macedonian Academy of Sciences and Arts (MANU), Ljupcho Kocarev, continues to highlight the existential threat the imposed agreements with Greece and Bulgaria have on the Macedonian nation.

Kocarev has been exposing the current process which aims to degrade the Macedonian nation through eliminating the institutional capacity to represent its interests. The first academician has previously called the Prespa Agreement a “factor of destabilization in the Balkans” and considers the negotiations with Bulgaria a self-defeating act.

In his opinion article for the daily newspaper Nova Makedonija, Kocarev sent out a rallying call for people to stand up to the crisis which has fallen upon the Macedonian people:

“All we have to do is to stand upright in dignity and determination behind the following fact:

The Macedonian name, language, identity and history have a centuries-old tradition in and outside the borders of today’s Macedonia.

If we do this, the Macedonian continuity will remain to bear in the posthistory of Macedonia.”

Kocarev reflected heavily on how the state and its institutions are being arranged in order to re-shape Macedonian identity for its post-historic future as a nation.

According to him, the current administration has set in place a number of changes resulting in the watering down of the foundations of the Macedonian identity.

Prime example of that is the Prespa Agreement which contains the term ‘nationality’ in the English text, however, the Macedonian translation has intentionally replaced that term with ‘citizenship’.

Kocarev states that Citizenship in the Macedonian text and Nationality in the English text are two different terms.

The head of the Academy points this is in violation of the UN Universal Declaration of Human Rights that stipulates the right to nationality, suggesting that the Prespa Agreement brings into question the sovereignty of the Macedonian state.

Three other developments are cited by Kocarev as examples that the state is determined to change the way Macedonians see and understand their own nationality.

Educational reforms are in the process of being carried out – without public debate and against the objections voiced by experts.

The reforms will reformulate the contents of the subjects of history and geography, heavily playing down the core precepts of the Macedonian ethnicity and the ethnic Macedonian continuity on that territory.

Reforms in the State University Saints Cyril and Methodius have rearranged a number of programs for the learning of the Macedonian language and literature.

As an announcement of the things to come, the official program document (2020 – 2023) of the Blazhe Koneski faculty fails to include the term ‘Macedonian’ in the official naming of the relevant faculties.

In summary, Kocarev hopes that the “darkest scenario” shall not come to a head, where the Macedonian posthistory will be emptied of the determinants for Macedonia, the Macedonian language and Macedonian identity.