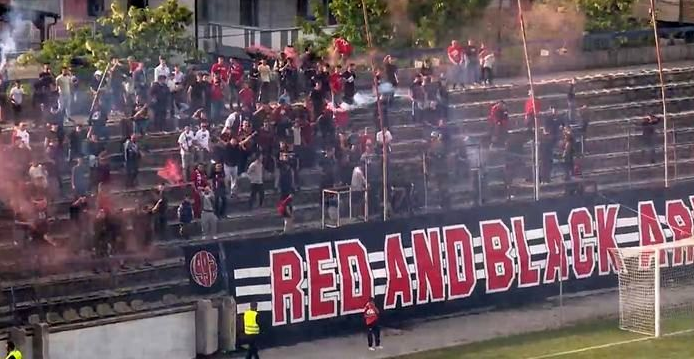 The local police branch of the Interior Ministry in Tetovo has announced legal charges against football fans who gathered to celebrate their team’s claim of the national football championship.

The “Balistet,” who are named after Albanian World War 2 Nazi collaborators, broke the anti covid measures by gathering in the city stadium in Tetovo.

According to the measures prescribed by the authorities, sports fans are barred from attending football matches and other sporting events.

This wasn’t the only incident during the last game of the 2020/2021 championship.

Players of the visiting team Shkupi withdrew to the locker rooms 15 minutes before the end of the game, because of the presence of fans on the stands.

The game resumed after the police cleared the stadium.

There has been no information as to who let the “Balistet” – FK Shkendija’s fans inside the stadium of the majority Albanian Tetovo.

Last week, members of the group gathered on an overpass on the Tetovo-Skopje highway to antagonize the fans of their rival team, FK Vardar Skopje.

Having lost their second to last game of the season, Vardar became relegated to the second league, giving FK Shkendija fans a reason to post a banner on the overpass.

According to FK Vardar and their diehard fans, Komiti, Vardar’s bus was stopped by the Tetovo police several kilometers before reaching the overpass for a routine check.

According to Komiti, the police acted in coordination with the Balistet, who used the moment to prepare their timing and set ablaze dozens of flares just as Vardar’s bus passed below.

The Ministry of Interior has not made a formal reaction, regardless of evidence that Vardar’s bus was stopped at a momentous point in time.

Shkendija will begin its UEFA Champions League qualifications this summer.