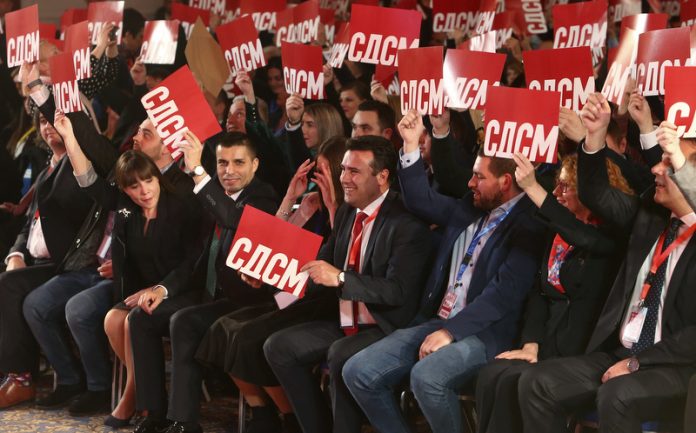 The most notable takeaway from SDSM’s congress Sunday is the party is undergoing significant changes in the top echelon and this will impact its internal politics.

SDSM’s leader, Zoran Zaev, introduced fresh to both the Central and Executive boards. 45 out of 120 delegates fall within the “young” category. Also, half of the delegates are women.

Zaev has surrounded himself with a new set of deputies which now include Minister of Health Venko Filipche, Minister of Economy Fatmir Bitikji and Sanja Lukarevska, a long time party member.

The latter has replaced Radmila Shekerinska from the position of Deputy President of SDSM. Shekerinska once ran for Prime Minister and servers currently as Minister of Defense.

Another notable who is no longer part of the SDSM decision-making body is Kumanovo’s Mayor Maksim Dimitrievski who has voiced opinions that were contrary to the party line, mainly relating to the controversial negotiations with Bulgaria. There is the possibility

Will this ambitious renovation of SDSM change the public’s impression of the party?

Besides bringing more energy into the party, Zaev’s injection of youth into the decision making boards will see any dissident voices silenced.

Individuals like Radmila Shekerinska and the recently fired Stojko Paunovski are experienced party functionaries who have shown publicly that they don’t toe the party line when they feel wrong decisions are made.

Although Zaev’s replacing of Shekerinska was presented in the media as a professional decision and that the two remain on great terms, the truth is likely something else.

Shekerinska, like Paunovski and Dimitrievski, has had different views about the state of affairs in the country.

Although the public isn’t informed about the issues Shekerinska was concerned with, it was soon revealed that she didn’t take her removal too kindly.

Following the congress, an audio recording was leaked where Shekerinska can be heard reflecting on foreign policy matters, internal party relations and the culture within the party

Shekerinska isn’t too specific, but those in her immediate company must have known what’s on her mind.

I have to say that I am worried about certain matters and I wish that I wasn’t in the right about this. I am worried because we are walking into an old trap regarding some questions. We seem to be closing our eyes to problems that only we can resolve.

I am worried about having to keep your calm so that some problems are resolved, but these problems only grow bigger. I am worried because it gets suspicious when a person has their own position or a stance.”

Shekerinska adds in the leaked recording about being hopeful that SDSM members will resolve problems instead of only murmur about them, because that can help the party.

Another audio from the congress has the voice of party member Vladimir Mitrevski, who criticized Zaev’s decision to remove Paunovski from his position as Director of the Markets Inspectorate.

Mitrevski addresses Zaev to defend Stojko Paunovski’s decision not to hire new employees that were hand-selected by DUI. The party delegate had told Zaev directly that he discharged Paunovski because he followed the Law. “This was a catastrophic mistake,” pointed Mitrevski.

One of the changes that were expected from the public is the appointment of Health Minister Venko Filipche as a Zaev confidante.

Filipche was in the spotlight for the decision-making process which delayed anti covid vaccine import in the country, which further complicated the output of the economy.

Also notable is that some media outlets accused Filipche of ginning up procurement documents for vaccines from China, in order to score dividends for himself and his inner circle.

Zaev’s SDSM is facing a tough period ahead as negotiations with Bulgaria are expected to resume and the economy is on shaky grounds.

Daily political issues have had a significant bearing on the public’s opinion – like the case of the new real estate legalization Law, which President Pendarovski immediately voted down.

Today, the Republic of Kosovo informed authorities in Macedonia about refusing to allow a large cargo of wheat flour and other flower products.

This concerns hundreds of people and an entire sector of the agricultural field, which depends on exports for liquidity so the Government will be under pressure to untangle the knot.

Things will heat up in August when the population census will again become the number one topic, in view of all the controversies that led to its postponement from April to September.

In terms of party politics, SDSM is gearing up for the upcoming local elections. Although predictions are not public yet, SDSM has a legitimate fear of losing multiple municipal posts.

Long-time party head Branko Crvenkovski may come up with his own party. He will certainly have the support of notables like Shekerinska, Paunovski and Dimitrievski.

If the rumors are true, a SDSM offshoot will be poised to take away thousands of votes from Zaev’s candidate lists – but if this is to happen, it will likely unfold prior to the next parliamentary elections.