Macedonia loses to Romania despite a snappy two-goal comeback 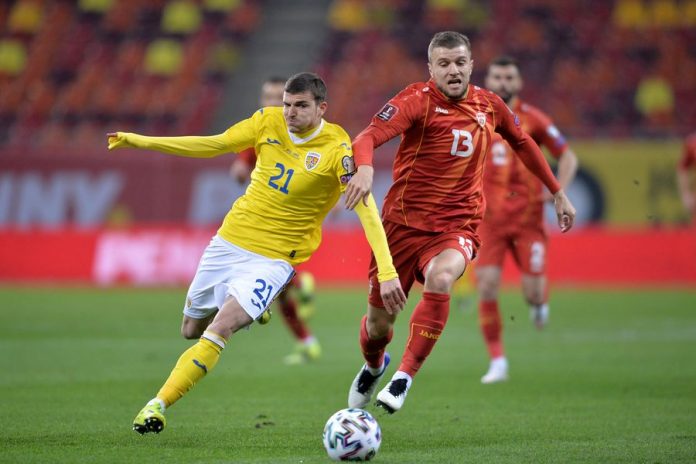 Romania edged past Macedonia in a close game that would have ended a tie were it not for a slim offside trap that voided a late Macedonian goal.

Macedonia took an early initiative in the 7th minute when Ilija Nestorovski failed to hit the ball following a perfect pass by Alioski. The ball reached Pandev who made a pass to Nestorovski for a second clear shot but the striker couldn’t find the frame.

Romania didn’t impress with its play yet succeeded in scoring a goal in the 28th minute. The hosts’ offence picked up confidence and made few vigorous attacks on the goal of Stole Dimitrijevski, but none materialized into a second goal.

The second half led to an early goal by Valentin Mihalia who sent a screamer from 25 meters away, leaving Macedonia’s goalkeeper without a chance for a save.

Macedonia made a bold push resulting in two quick goals. First Arijan Ademi hit a perfect header that was no match for the Romanian keeper in the 82nd minute.

Only one minute later, a lost ball picked up by Enis Bardhi found its way to Aleksandar Trajkovski who gave it a single touch to place it in the net.

Unfortunately for Macedonia, the Romanians needed three minutes to recuperate from the shock when Ianis Hagi scored in the 86 minute.

The Macedonian team’s hopes for a tie were dashed, but a push on the goal resulted in an offside trap that voided a goal by Arijan Ademi in extra time.

Macedonia started the World Cup qualifications with a loss, but the game against Romania leaves hope for improvement that may see the team fine-tune its communication, especially in the defence.

The next game against Liechtenstein three days from now isn’t going to be a breeze, however, because the micro-nation gave Armenia a hard time, conceding only one goal in its first home game.