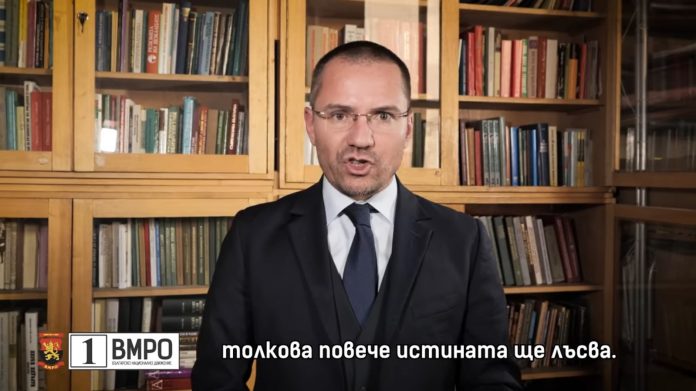 Angel Dzambazki, a determined Bulgarian nationalist, chauvinist and xenophobe who is a member of the government coalition and an EU Parliament MP, has released a scandalous video to boost his party’s chances in the coming parliamentary elections in Bulgaria. This is not Dzambazki’s only antagonistic act against Macedonia.

Dzambazki, of the VMRO-BND party headed by Bulgaria’s defence minister and deputy prime minister Krasimir Karakachanov, said “Macedonia is a Bulgarian land and Bulgaria is above all.”

Reels of Ohrid and Skopje, which he considers Bulgarian cities, provide the background to his video address which calls on voters to vote for VMRO-BND on Sunday.

Dzambazki makes a veiled threat to Macedonia’s Prime Minister Zoran Zaev with the following words: “Zaev! Respected! No matter how you turn it, Macedonia is Bulgarian. No matter where you are turning, Albania will always be to your west.”

Dzambazki and his party colleagues have frequently used the partition of Macedonia as a premise for Bulgaria’s role in the matter. Bulgaria has never given up on the short-lived San Stefano Peace Treaty dream in which Russia “gave” most of Macedonia, parts of Serbia, Greece and Albania to Bulgaria.

His speech caters to ultra-nationalist and nationalist Bulgarians which represent a significant portion of his country’s body politic. VMRO-BND fears its voters will turn to celebrity host Slavi Trifunov who has launched his own nationalist party – one of several in Bulgaria.

“My dear – and I say ‘dear’ because of my rearing – temporary governors of our, my Macedonia – you can’t live in the 21 century without recognizing the 20th. The more you lie, the shinier the truth is going to be.

The more fiercely you are inventing your own false story, the worse the collapse of the false foundations on which you’ve built your miserable present.

The more hysteria there is in your hate towards Sofia, Ohrid becomes Bulgarian even more so. The louder you are telling your lies, the quicker and more terrible will be your end” said Angel Dzambazki.

Sofia’s official position in the negotiations with Macedonia is that a Macedonian identity has never existed as separate from the Bulgarian nation and that the Macedonian language is a Bulgarian dialect.

Despite a brief period following WW2, when Bulgaria as a losing party enabled Macedonians to state their ethnicity in the population census and provided the conditions for cultural autonomy, Sofia has been persistent in its claims that all Macedonians are Bulgarian and has conducted a policy of total denationalization and persecution in the region of Pirin Macedonia.

Substantial self-defeating evidence inadvertently created by Bulgarians points to the opposite, that Macedonians have always regarded themselves as a separate people which launched its liberation movement separate from the Bulgarian bid for independence from Ottoman Turkey which was aided by foreign powers.

Most notable historic event that proves Bulgarian claims as false is the Macedonian St. Elijah’s Day (Ilinden) uprising in 1903. Bulgaria with its substantial standing army did not aid the uprising and did not step in to prevent the atrocities that were committed by Turkish army and paramilitary troops.

Despite this, Bulgaria maintains in the negotiations with the Macedonian government that the Macedonian liberation movement was an ethnic Bulgarian affair.