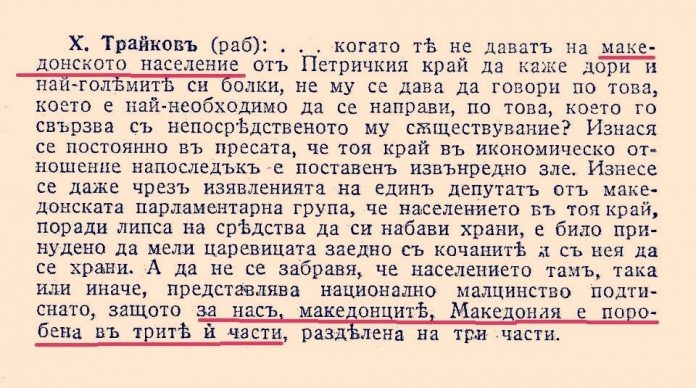 In a rare glimpse to how Bulgarian officials viewed the Macedonians from the 19th century and insight to the national awakening of the Macedonian people during the same period – we can see Macedonians already identified with ancient Macedonia and rejected Bulgarian propaganda.

Petko Slaveikov’s reflection on the Macedonians in his book Makedonija, 1874

At last, the Macedonian question had emerged in the public and in the press. We say at last, because this question is not a new affair altogether. We heard it ten years ago (in 1864) from some people in Macedonia that they are not Bulgarians, but Macedonians and descendants of the ancient Macedonians, that the Macedonians are Slavs and the Bulgarians are Tartars, and I don’t know what else.

In the beginning we took the words of these patriots as a mere joke, something to throw in the fire of our not-so serious disputes. That is how we considered the issue for two, three years, but upon striking new discussions with some Macedonians they showed us those weren’t naked words, but it was in their thoughts too, and something that the majority of them wants to carry out in practice.

It was both sad and heavy for us to hear such words, but we wouldn’t dare discuss the matter in the press because it was quite delicate, especially considering the situation we were in. Today that question has come out on the market, thanks to the lack of attention by one of our Bulgarian brothers and now, whether we like it or not, we are forced to bring it forth to the public.

Atanas Shopov, Bulgarian Diplomat, on the Macedonian question in 1885

No one would have been able to destroy San-Stefano Bulgaria had there been in Macedonia the kind of awareness that exists among the Bulgarians in Bulgaria and Thrace, had there been a thundering voice coming out of Macedonia that a Bulgarian people lives there. . . The Congress of Berlin did not result in autonomy for Macedonia and did not connect that land to Bulgaria or East Rumelia for the simple reason of England being strongly on the position that the overwhelming majority in Macedonia is far from being Bulgarian. . . Therefore, if today, in 1885, Europe would ask the people of Macedonia to state to which nation it belongs, we are certain that the better share of Macedonia is going to fly out of our hands. If we exclude the two, three regions in the north of the country, all other Macedonians are prepared to give any kind of written document that they are not Bulgarians.

Ofeikov (pseudonym of Atanas Shopov, Bulgarian diplomat): Macedonia at the time of the millennium of Saint. Methodius, Plovdiv 1885, pgs 71-73.

Hristo Trajkov’s Speech in the Bulgarian Parliament in 1932

Let us not forget, the Macedonian population in the Petrich region, one way or another, represents a repressed national minority because to us Macedonians, Macedonia has been divided in three parts, all of which are occupied.

… When you realized that in the city Nevrokop the population is ready to vote for any other list except the one that you are pushing, because at last your consciousness didn’t come to bear, so once and for all I ask you to stop liberating the Macedonian people, whose sufferings you like to only portray as epic. If the Macedonian people are being killed, then you are the ones who are killing them.