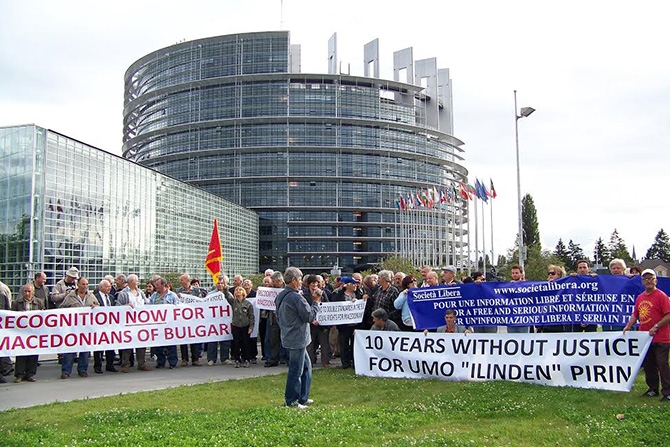 Bulgaria is facing international pressure for having failed to recognize or register Macedonian cultural associations for more than three decades, says Toni Menkinovski, the international legal representative of the Macedonian groups in that country.

In a recent decision, the European Council of Ministers has issued a Resolution that demands Bulgaria to allow Macedonian ethnic associations to register with the state until June 2021. If Bulgaria fails to comply, it risks being removed from the Council of Europe, reports the Macedonian organization in Albania, Ilinden.

According to Menkinovski, Bulgaria is manipulating its position as a EU member state in the negotiations with Macedonia, to pressure the latter to give up any official contacts or support for the Macedonians in Bulgaria.

By barring them from registration, the Bulgarian state wants to delay the eventual recognition of the civil right of participating in an organization that has peaceful and friendly purposes.

Macedonian associations have the noble goal of preserving the Macedonian culture and language in Bulgaria, something which is a given right to all minorities and ethnic groups across the European continent, except for Macedonians living in Greece and Bulgaria.

It’s been almost every year for more than three decades that the European Court of Human Rights in Strasbourg brings rulings which call on the Bulgarian government to enable Macedonians to register their associations.

Although the rulings are not binding, Bulgaria’s reputation is at stake as the country doesn’t want to find itself on lists together with repressive regimes from around the world.

According to Menkinovski, the rigid institutional blockade that the Macedonian ethnicity in Bulgaria is faced with reminds of the period during World War 2 when Bulgaria launched a brutal expansionist policy that occupied Macedonia and conducted an ethnic cleansing and general plunder of the population.

The lawyer advises that the Macedonian government should make use of the fact that Bulgaria is facing removal from the Council of Europe and make the human rights conditions in the country an international issue, especially in NATO.