Is Macedonia ready for a new political era amidst new challenges? 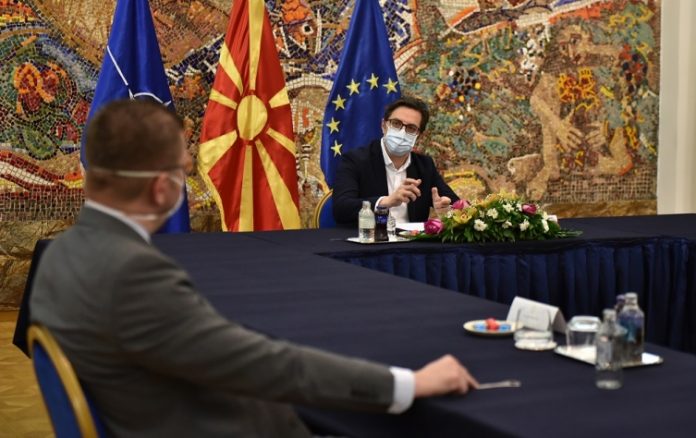 Communication between the two major political parties, VMRO-DPMNE and SDSM, has never been exemplary of a functional, pluralistic arena of national politics.

On the contrary, it seems that periods when they are not hurling insults at one another are an exception. Blocking the work of Parliament has been the go-to method of preventing the work of the incumbent party since Macedonia became an independent state in 1991.

The announcement that VMRO wants to hold a meeting with the President of the country, SDSM member Stevo Pendarovski, has to be seen in light of the above. In Macedonian politics, an event such as this is rare and likely prompted by issues of deep concern.

On Wednesday, media reported VMRO’s party president Hristijan Mickovski had requested talks with Pendarovski. Their eventual meeting will be the first following a nine-month freeze in communication.

This comes on the day that has been marked by a number of messages and events that speak of the course of action that can be expected in the coming months.

Firstly, the EU sent a notable quantity of anti-covid vaccines to Macedonia and other Western Balkans countries.

Their belated act of “vaccine diplomacy” follows in the footsteps of China and Russia who have responded to the need for vaccines as early as December.

With this, the EU is sending the message it hasn’t altogether departed from its policy considerations regarding the region – especially not following the so-called non papers which proposed dangerous “solutions” through land swaps between antagonistic actors.

Along with the vaccines came EU’s Commissioner for Enlargement, Oliver Varhelji, who relayed to the Zoran Zaev government, and the political elite in general, that Macedonia is nowhere near close to starting negotiation talks.

It has been a practice of the EU to group together countries when consequential, game-changing decisions are being made, such the case with Kosovo’s independence when Macedonia recognized the breakaway region in package with Montenegro.

In this view, Macedonia and Albania have been made part of the same package when it comes to enlargement and the EU has held on to this approach as a matter of practicality and policy in respect to the Western Balkans region.

Since Varhelji’s working visit to Skopje, political actors in Macedonia – most notably SDSM and VMRO, have been presented with a disconcerting message – that it is highly probable that Albania is going to begin enlargement negotiations in a separate process from Macedonia, since it has already made good on requirements from the EU.

On the same day, Prime Minister Zoran Zaev also met with Austria’s Minister for Europe. The takeaway from the meeting is in the Minister’s message that Macedonia and Albania should stay together as part of the enlargement process – that separating the two countries comes with risks and it should be prevented.

Across from the EU high chairs sit the heads of SDSM and VMRO – Zaev and Mickovski. Both politicians want to see Macedonia in the EU and as of May 5, both want Macedonia to enter the union with the identity of the Macedonian people intact.

The overwhelming majority of the public condemned Zaev in his attempt to show good will on the part of his government by calling Bulgaria’s occupying force in Macedonia an “administrator”. Since that moment, Zaev has backpedaled and even drew a red line in the negotiations that concern the Macedonian identity.

“We don’t need the EU at the cost of the Macedonian identity and language – because we are going to become dust lost through the wind. Who, then, will enter the EU [if not Macedonians]?” stated Zaev during an event celebrating the Day of the Macedonian language.

Furthermore, Zaev stated that the issue between Macedonia and Bulgaria is irrational but that he wishes to make reach an agreement with Bulgaria during the period when that country is going to be headed by a technical government until the repeat elections in June.

To make a full circle back to the opening remarks of this text – enter Mickovski’s request to have an eye to eye with President Stevo Pendarovski.

Pendarovski stated that the meeting can contribute to improving the political dialog, which has been “dearly absent” in the country’s political arena.

It is expected that the subject of EU integration and the negotiations with Bulgaria is going to take up most of their time, however,
the two statesmen are also going to talk about the inter-Macedonian issues that form the core of the conflict between their respective parties.

Unlike most political parties in Bulgaria, VMRO and SDSM do not have a singular position in the negotiations and this undermines Macedonia’s position and certainly delays the country’s talks with the EU.

Even though cross-party insults and accusations will continue to be part of the daily politics menu, the non papers and the mixed messages that came from the EU, on one hand, and Austria, on the other, certainly prompted VMRO and SDSM to sit down and focus on what is best for the nation.

The core issue, aside of the stalled talks with Bulgaria, is the event that gave birth to the current government and landed a number of VMRO sympathizers and members in jail – the taking over of Parliament on April 27, 2017.

Following the popular protest on April 25, which demanded retrials for individuals who were jailed on charges of “terrorism”, VMRO’s President Hristijan Mickovski said he supports the demands, believing the “defenders of the constitution” were jailed and tried under unjust circumstances.

The next day Pendarovski followed up saying that he knows a thing or two about terrorism and that he doesn’t believe the draconian jail sentences (10+ years) fit the events that took place that Thursday in April of 2017.

Although Pendarovski’s statement angered the Albanian political block, which sent a message by staging a protest in front of Pendarovski’s residence, the President is likely considering to further the likelihood for a retrial.

If it comes to that and the jailed Macedonians have their harsh sentences reconsidered, VMRO and SDSM will send a clear message to the nation – that it is time for a new era in Macedonian politics, one that is based on a political culture that is more like that of advanced EU states and less like that of the Balkans which is striving for something new and better.

It is certain that Macedonia is facing major challenges ahead and that bold decisions will have to be made.

Separating Macedonia and Albania from the negotiation process will put Macedonia in a more hurried, anxious state – which will be seized by Bulgaria; the latter will want to capitalize on inter-Macedonian divisions and the poor political climate that thrives under those circumstances and further breeds more discontent and poor decision-making.

Talks between Pendarovski and Mickovski can result in “safety measures” that can be implemented against the scenario above. What Macedonia needs right now is mutual understanding between the Macedonian people and their political representatives, underpinned by a new political culture of dialog and finding lasting solutions.

Opinion piece by Martin Anastasovski – views are the author’s own.

Foreign spying crucial in fall of previous government in Macedonia