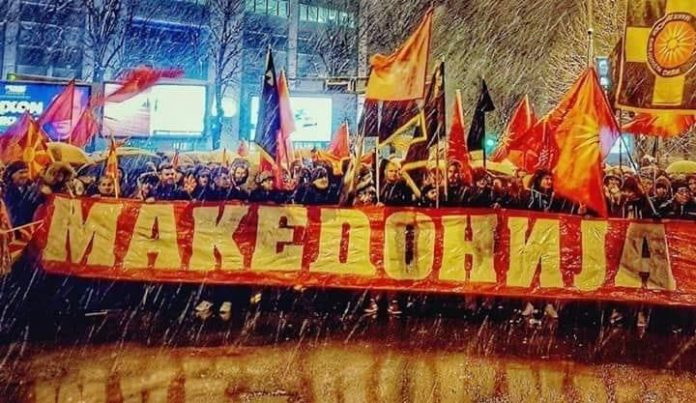 Macedonia’s Prime Minister Zoran Zaev is facing domestic blowback in the wake of his interview for Bulgarian news agency BGNES in which he downplayed Bulgaria’s role during its World War 2 occupation of Macedonia. The main opposition party VMRO-DPMNE is calling for Zaev’s resignation and started public protests around the country, while members of the Macedonian group of experts in the bilateral commission on historic and educational matters have also denounced the prime minister’s claims.

On November 30, the permanent representatives council of the EU concluded that Macedonia will not be given a green light to begin negotiations with the EU, following Bulgaria’s veto of that decision. In June 2019, Mr Zaev had stated that he is going to resign if Macedonia doesn’t receive a starting date for the country’s talks with the EU.

Dimitar Apasiev, the leader of the leftist party Levica, used his Facebook profile to call for a unified anti-government front that will put an end to, according to him, “the greatest evil that has befallen Macedonia” since World War 2. It appears that Levica, a vocal critic of VMRO-DPMNE, is going to unite with that party in staging protests which have already taken place in Skopje and Sveti Nikole. Anti-government protests are resuming tomorrow, December 2, in 15 towns around the country and in front of the Government’s building.

Even though Macedonia seems to enjoy moral support coming from Germany, which chairs the Union’s revolving presidency until March of 2021, foreign diplomats have suggested that Macedonia and Bulgaria must resolve their differences bilaterally.

Germany’s State Minister for Europe Michael Roth stated that the EU must make a clear difference between bilateral conflicts, such as that between Macedonia and Bulgaria, and issues that are of central importance for Europe. Mr Roth suggested that the European Commission wants to be of help, but stated that bilateral problems can not be carried over to the European level.

Zoran Zaev says he is hopeful that Bulgaria is going to rescind its decision of blocking Macedonia’s EU path, while expressing disappointment with the EU: “This is a great injustice and I have no other explanation for this decision except that of the upcoming elections in Bulgaria.”

Zaev stated the names of several politicians – those of Germany’s and Slovakia’s foreign ministers Heiko Mass and Miroslav Lajcak and Greece’s former Prime Minister Alexis Tsipras, among others, saying that they didn’t honor their commitments. Zaev said, “this [Bulgaria’s veto] is the biggest defeat for the EU,” calling it a “hindrance of european values.”

The road ahead for Macedonia starting talks with the EU is uncertain. Bulgaria’s President Boyko Borisov and other high-ranking politicians have reiterated three key statements that make accepting that country’s demands work to Macedonia’s disadvantage. The three elements that Bulgaria demands of Macedonia: to accept that the Macedonian nation has Bulgarian ethnic roots; that the Macedonian language is a dialect of the Bulgarian language and that there has never existed a Macedonian minority in Bulgaria.

Bulgaria seemed to feel comfortable with the suggestion by Macedonia’s Foreign Minister Bujar Osmani that a so-called “Roadmap” could be added to the bilateral Agreement that was signed between the two countries in 2017. The Roadmap would become annex to the Agreement and set-forth benchmarks and dates for its fulfillment, however, that possibility was negated by the Macedonian government on November 30.