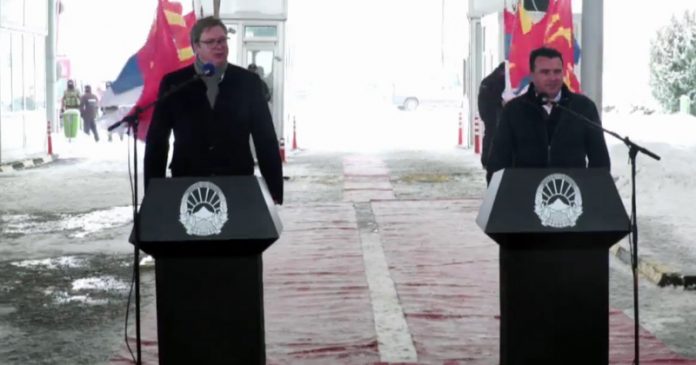 The President of Serbia and Prime Minister of Macedonia, Aleksandar Vucic and Zoran Zaev met at the border crossing Tabanovce to officialize the handing over of 4,680 vaccines – the first cargo to reach Macedonia in what can be described as a saga of hurried announcements.

Zaev and Vucic exchanged cordial remarks on the occasion. Serbia’s president extended a message to underscore his country’s interest in Macedonia’s affairs, saying: “A true friend is the one who comes to your help in a difficult situation, amidst a calamity – instead of when everything is all right.”

His Macedonian colleague Zoran Zaev are expression of a “a hand of help extended in friendship by neighbors and the first help for the Macedonian citizens until we receive those which we ordered.” Macedonia is expecting the second batch of 8,000 Pfizer vaccines from the northern neighbor.

It is unclear whether the donated vaccines will be enough to immunize the prioritized health care workers in the country.

More than 37,000 individuals have registered for the vaccine since the Ministry of Health launched a website for vaccine registration.

The government announced Wednesday it is expecting 200,000 Sinofarm vaccines by the end of this month but the government backtracked on Saturday when Zaev stated a delay is possible due to the Chinese New Year celebration.

In a radio appearance on Friday, President Stevo Pendarovski stated that the delays may postpone the census operation which is scheduled to take place between the first and 21 of April. Pendarovski suggested the census may take place one or two months later.