EU Agrees to Agree to Conclusions Text regarding Enlargement 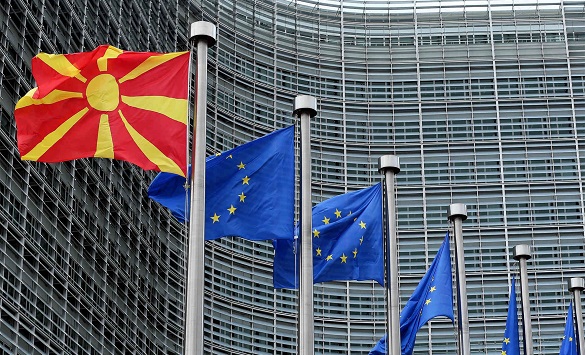 The EU has reached a compromise regarding a problematic formulation that Bulgaria was intent on having included in the EU Enlargement Conclusions document, whose signing is expected in the coming days, reported MIA agency.

Had the Bulgarian-made formulation “misinterpretation of history” been accepted in reference to Macedonia, Bulgaria would have gained a stronger position in exerting concessions that violate the right to self-determination by Macedonian people and that strive towards historic revisionism. Bulgaria is reputed for persistently avoiding the subject of its role in the Holocaust in school textbooks.

Bulgaria has been trying to pressure the SDSM-led Government to let up its sovereignty in determining the national and ethnic self-determination of Macedonians. Following a public outcry and protests against PM Zoran Zaev’s seeming readiness to make such concessions have resulted in the Government backpedaling.

Bulgaria’s desire to officially alter the Macedonian history is being carried out on two fronts – in official talks between historic experts that are part of the joint Macedonian – Bulgarian Commission on historic matters and within EU’s policy-making corridors.

With concessions made to ancient history, Greece formally agreed to cease blocking Macedonia in its European integrative processes. Bulgaria now seems intent on picking apart the rest of the Macedonian identity. In September 2020, Bulgarian diplomats submitted a paper to their European colleagues to inform them that the Macedonian nation has come into existence in 1945 and that a Macedonian language doesn’t exist, that it is merely a Bulgarian dialect.

Political observers agree that Macedonia has won a symbolic but important diplomatic victory. At the meeting of the top EU member state ambassadors, Bulgaria was obliged to accept that the problematic formulation “misinterpretation of history” will be part of the enlargement conclusions document’s preamble. With that, the formulation now applies to all countries in the Western Balkans and is not only specific to Macedonia.

The German Ambassador to Macedonia Anke Holstein said in an interview for the Macedonian Deutsche Welle portal that the formulation referring to the “misinterpretation of history” will have to be “equally adhered to by Macedonia, Bulgaria and Greece.” Whether this is going to dampen the Bulgarian mission for historic revisionism will be seen in the following months, or until the parliamentary elections in that country.

If the conclusions for the enlargement process of the EU are accepted, it is expected that Macedonia will begin negotiations with the EU. A meeting between Macedonian Foreign Minister Bujar Osmani and his Hungarian counterpart Peter Szijjarto on December 17 concluded with the statement that “negotiations between Macedonia and the EU must begin without any delay.”