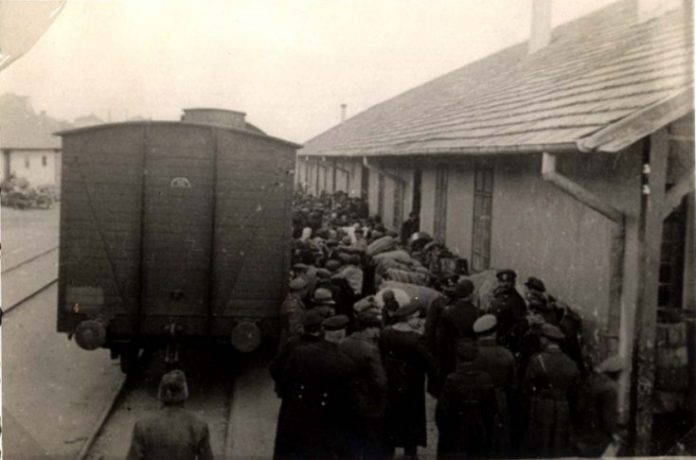 The Jewish Community of Macedonia has issued a statement that takes into account the deportation of 7144 Jews to the Treblinka death camp during the occupation by the Kingdom of Bulgaria and raises the question of the modern-day disregard for that event by the Bulgarian Government. The letter calls on Borissov’s Government to acknowledge the “historic truth” of his country’s dark pro-nazi history and apologize for the holocaust of Macedonian Jews.

Macedonia Times shares an unofficial translation of the letter:

Taking into consideration the constant and continued attempts to impose a single “historic truth” regarding historical events taking place on the territory of today’s Republic of Macedonia during World War 2, the Jewish community and the Jewish Holocaust Fund in Macedonia wish to point out the unwavering historic facts that have been widely accepted about the role of the Kingdom of Bulgaria in the Holocaust and the deportation of Jews from the present territory of Macedonia, by reaffirming the following position:

1. During World War 2, the present territory of the Republic of Macedonia populated by around 8000 Jews has been under direct occupation of the Kingdom of Bulgaria and Italy, who were allies in the Axis. The Jewish population during World War 2 has been placed under Bulgarian occupation. The Bulgarian pro-nazi government had proceeded to an immediate application of the antisemitic Law For The Protection of the Nation, according to which Jews lose all citizen rights, are dehumanized, taxed for their property, legally robbed, made to wear a Star of David patch on their person and on their homes, their stores shuttered and their businesses and money confiscated.

2. The pro-nazi Bulgarian government headed by Bogdan Filov and Tzar Boris III, gives an agreement to the deportation of Jews from Bulgarian-occupied territories and from the country of Bulgaria itself. On 22 February 1943, Aleksandar Belev – Commissar for Jewish Matters and Theodor Daneker – representative of Nazi Germany, sign an Agreement for the immediate deportation of 20,000 Jews from the occupied territories and from Bulgaria.

According to this agreement, on 11 March 1943 the Bulgarian pro-nazi army and police conduct a forceful rallying of Jews from their homes in Skopje, Bitola, Shtip… and transport them inside a temporary transit camp in the Tobacco Combinate in Skopje – the so-called “Monopol”. From that location, 7144 Jews, or 98% of the entire Jewish population of that time has been loaded on trains and shipped away on March 22, 25, and 29, 1943. The action was carried out by the occupation government of Bulgaria, the Commessariate of Jewish Matters and logistically supported by the Bulgarian railroad authority. The people inside the freight trains had been deported and handed over to the Nazis in the extermination center in Treblinka. None of the deported Jews from Macedonia returned alive.

3. The Jewish Community and the Jewish Holocaust Fund of Macedonia consider the pro-nazi government of Bulgaria from that time to be directly responsible for the forceful gathering of the Jews from their homes, for the theft of their movable and unmovable property on the territory of today’s Macedonia, East Macedonia and Thrace in today’s Greece and from the city of Pirot in today’s Serbia during World War 2. More than 11,300 Jews from these occupied territories were forcefully sent to certain death by the pro-nazi Bulgaria government of that time.

4. The Jewish Community and the Holocaust Fund pays its dutiful remembrance and respect to the Macedonian citizens, known and unknown and of various ethnicities, for risking their own lives and the lives of their families in the attempt to save Jews from certain death. These people are proclaimed as honoraries among the nations:

The Jews from Macedonia pay their dutiful respect to the Bulgarian Orthodox Church, the anti-fascist society, 43 parliamentarians headed by Dimitar Peshev and other intellectuals who by their own efforts had succeeded to stop the deportation and to protect the Jews of Bulgaria from the pro-nazi regime in Bulgaria, but not the Jews in the other occupied territories.

5. Jews during World War 2 were actively involved in the National Liberation Struggle together with their fellow Macedonians, Albanians, Turks, Roms, Vlachs, Serbs, Bosniaks… Many Jews gave their lives fighting for freedom. One of them is Estreja Ovadia-Mara who gave her life in 1944 fighting against the Bulgarian occupation army. She was later pronounced as a National Hero.

6. Today’s Government of the Republic of Bulgaria is encouraged to follow the example of many European states that took the wrong side during World War 2, and find the moral obligation to recognize guilt and take responsibility for the atrocities committed by the predecessors – the Bulgarian pro-nazi Government, against the Jewish population in the occupied territories during World War 2.

By revoking the verdicts in 1996 that had been brought by the National Court in 1945 and by abolishing the perpetrators of the Holocaust in World War 2, the government of Bulgaria promotes a conscious cover-up of its dark history and that doing, it contorts the truth of the Holocaust against the Jewish population in the occupied territories. This represents a total contradiction of the International Holocaust Remembrance Alliance (IHRA) definition for negating and distorting the truth about the Holocaust.

7. We call on the Government and the officially-elected political authorities of the Prime Minister, President and President of the Assembly of Republic of Bulgaria, to face the truth regarding the Holocaust of Jews in the occupied territories, for which the pro-nazi Government of the Kingdom of Bulgaria is directly responsible, to accept responsibility and to give an apology.

The sooner the democratic Republic of Bulgaria comes to terms with the painful and dark moments from its own past, the sooner it will be possible to make a reconciliation, as denying a crime is the first step to repeating it.

8. The position of this address can not be interpreted as anti-Bulgarian towards the democratic Republic of Bulgaria today and its people.

Jewish Community in the Republic of Macedonia

The letter comes following a period in the negotiations between Macedonia and Bulgaria during which the Minister of Defense and Vice Premier Krasimir Karakachanov and Minister of Foreign Affairs Ekaterina Zaharieva have made numerous statements that demand of Macedonia to “admit” the “historic truth” that Macedonians have Bulgarian roots and that the language of the people is a dialectical norm of the Bulgarian language. Bulgaria’s Prime Minister Boyko Borissov has made similar statements that reflect Bulgaria’s refusal to accept the existence of a Macedonian nation.