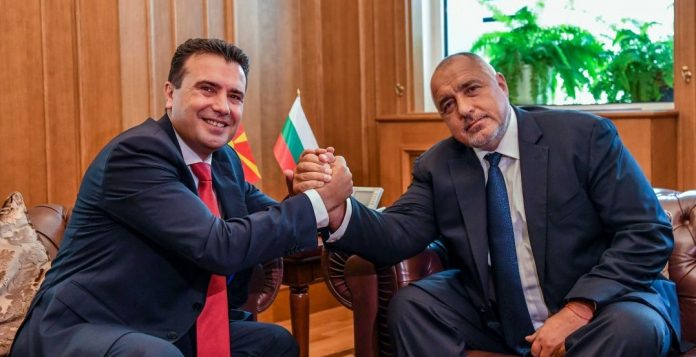 Foreign minister Ekaterina Zakharieva reported on Thursday morning that her government is not going to bow to anyone’s pressure regarding Macedonia. “They need to understand that the European Union doesn’t function the same way Yugoslavia did. No one can impose to us how we should act inside the Union,” stated Zahkarieva on the national television channel BTV.

Her remarks come following a working visit with the Macedonian foreign minister Bujar Osmani. The two chiefs of diplomacy agreed to soon hold a second inter-government session, cooperate on structural projects according to the action plan and release a conclusions document referring to the historic committee’s work in the past year.

Over the past two weeks, Bulgaria was criticized for its blockade of Macedonia from the EU integration process.

The foreign ministers of Czechia and Slovakia had issued a joint statement critical of Bulgaria prior to the Slovakian minister’s meeting with Bujar Osmani. This was followed by further critique from the German ambassador and later from the US Ambassador to Macedonia.

These condemnations are likely to fall on deaf ears if their purpose is to achieve anything else than to simply admonish Bulgaria for abusing its EU member state privilege. Macedonia is now in the same position as in the past three decades when the country’s integrative processes and its national security were negatively impacted by the Greek blockade.

Greece has succeeded in pushing Macedonia to change its flag, name and identity. Is there anything that can prevent Bulgaria from achieving similar gains at the expense of the Macedonian state and people?

It has become evident that the Bulgarian government moves to promptly underscore its hard line position on Macedonia following working visits with Macedonian representatives.

Bulgarians are used to hearing the name of the former South Slavic federation in the same sentence with Macedonia because Yugoslavia and Serbia are seen as the main culprits for the Bulgarian “loss of Macedonia”.

The president of Bulgaria, Rumen Radev recently stated that there are 100,000 people in Macedonia who hold Bulgarian passports and they should be protected from “discrimination and persecution”.

Radev’s remarks are based on a letter his office had received from the president of an association of ethnic Bulgarians in Macedonia, according to which those who hold a Bulgarian passport have declared their ethnic Bulgarian roots and therefore must be included as Bulgarians in the coming population census.

While sensationalist claims like these are common in Bulgaria, the same politicians that make them avoid reflecting on World War 2 and the fact that Macedonians didn’t join the Bulgarian occupational force – quite the contrary, the overwhelming majority fought against them.

Bulgaria maintains that the Macedonian state persecutes people who have a Bulgarian consciousness and doesn’t prevent “hate speech”, while it ignores the fact that Bulgarian passport holders in Macedonia, like those in the Ukraine, are economic migrants to Schenghen-zone countries.

Even though the Bulgarian Cultural Center in Skopje and few other organizations act as an extended arm of the Bulgarian state, Sofia has denied ethnic Macedonians from registering cultural associations and a political party in Bulgaria for more than three decades.

This brings to light the appalling asymmetry of the negotiations. While Macedonia simply needs Bulgaria to remove its blockade on the path to EU membership, Bulgaria which is the EU’s poorest state, intends to relive its “Greater Bulgaria” fantasy which was a coinage of the San Stefano peace treaty of 1878.

Bulgaria’s demands step over the line of the reasonable and incur far into the area of Macedonian national self-determination, in violation of the UN Charter on Human Rights and are anti-European.

Bulgaria wants to have its own university in Macedonia and national TV station among similar outposts of “soft-power”. On the other hand, Bulgaria is already winning business concessions in Macedonia.

Supermarket chain Lidl is opening its first branch in Skopje, which will be owned by a Bulgarian group. According to the business model of the popular chain, 30% of products in the store need to come from the business that holds the license in the home country, which in this case is Bulgaria.

Bulgarian business groups have been reported to be working towards purchasing strategic resources in Macedonia. Gold mining concession in the area of the village Ilovitsa near Strumica has been given to a company which has Bulgarian owners, however the persistence of environmental activists in the region has prevented the company from beginning exploitation.

Recently, Antropol the online news portal of the socialist political party Levica (The Left) has written about a possible sale of the large agricultural company Pelagonija to Bulgarian private interests.

All of this is evident that Macedonia has been pressured to make large-scale concessions while giving up on the right to narrate and nurture the history and identity of Macedonians in exchange for Bulgaria’s good will in removing its blockade to EU membership.