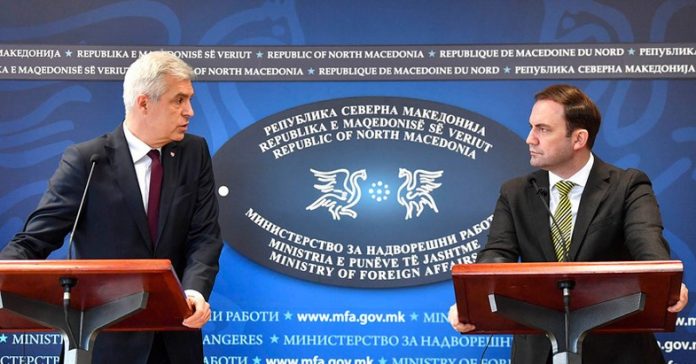 The foreign ministers of Czechia and Slovakia, Tomáš Petříček and Ivan Korčok, have issued a joint commentary piece for EU Observer in which they scald the EU’s policy towards Macedonia.

The commentary piece highlights the EU’s policy as sending “mixed” and “unclear” signals to Macedonia, underscoring that the country has fulfilled all of the conditions which were deemed necessary to begin negotiations, including the most difficult expectation of changing its constitutional and historic name.

The article coincides with the working visit of the Slovak foreign minister with the Macedonian minister of foreign affairs.

In a joint press-conference, Mr. Bujar Osmani stated: “We are aware that we shouldn’t bring any misunderstandings into the EU, but at the same time, we and others in the region are under the objective impression that the process for integration is becoming unclear, unpredictable and doesn’t reward accomplishments, but rather, it awards the momentary political conditions.”

The two foreign ministers and country-representatives in the EU Council begin their opinion piece by disclosing that their countries were labeled as “troublemakers” inside the EU body, for “trying to complicate the whole process” of enlargement.

In December, Czechia and Slovakia objected the draft conclusions text of the Council in which Bulgaria had pushed for the inclusion of the formulation “misinterpretation of history” as a consideration in the negotiating process for new member aspirants.

Germany had intervened with its own balancing act which was entered in the said document to stipulate that the phrase “misinterpretation of history” will be equally applied to Macedonia, Bulgaria and Greece.

Nevertheless, even if this expectation is applied to all, Macedonia’s eastern and southern neighbors are EU member states who have used their position to blackmail respective Macedonian governments, including the SDSM-led administration.

In the opinion piece titled EU Should Not be a Judge of Historical Issues, Mr. Petříček and Mr. Korčok make the argument that the door to the EU should be left open, with the EU to avoid becoming an “arbiter of national histories.”

Petříček and Korčok say that they don’t support any policy that would judge countries on the interpretation of historical issues according to other countries: “The notion of North Macedonia’s obligation to rectify the alleged misinterpretation of history is not acceptable” because “additional conditions would open the way for further bilateral demands in the future, potentially complicating the entire process for the years or even decades to come.”