The group of six men that executed Macedonian youths on the Smilkovski Ezero lake during Orthodox Easter in 2012 were sentenced for terrorism at the end of the second retrial on February 24.

The highly charged case has seen violent protests, with another large protest announced Friday. The case has been influenced and abused by politicians raising ethnic tension and distrust between ethnic Macedonian and Albanian communities.

When addressing the protesters during the Colourful Revolution, Zoran Zaev was eager to bank on his possession of the private recorded conversation know “bombs”. He claimed that if the public hears the truth about the Monstrum case, “there is going to be a war”.

Then-protester and acting President of the country, Stevo Pendarovski, echoed Zaev’s remarks and contributed to the general fear of ethnic tensions and violent protests.

On several occasions, Zaev publicly claimed the now-convicted terrorists are innocent and the “bombs” would reveal who stands behind the killings, causing the court to revoke the sentences given to the convicted men and send the case for a retrial.

Those comments fueled Albanian suspicions that the men where framed and increased ethnic tensions.

The case was transferred to the now-dissolved Special Public Prosecutor because of these claims, however the prosecutors did not find the conversations to have any bearing on the case Monster.

Both Zaev’s and Pendarovski’s claims have been debunked as fraudulent as no evidence has been recovered from the conversations as they have indicated.

April 12, 2012, Holy Thursday – an important Christian Orthodox Easter holiday, six men committed an act of terrorism that left many families in ruin and an entire nation in fear and disbelief.

Halil Demiri, Afrim Ismailovikj, Agim Ismailovikj, Haki Aziri, Fejzi Aziri and Sami Luta approached a group of friends who were fishing at a Similkovsko lake just outside of Skopje and executed them at point-blank.

According to the prosecutors and based on a police investigation that led to the arrests, the four Macedonian boys and a nearby fisherman had been murdered with the intent of causing panic and fear among the population and to incite an inter-ethnic crisis (terrorism). 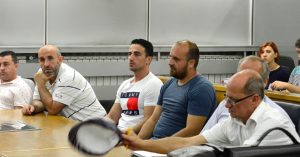 Halil Demiri and brothers Afrim and Agim Ismailovikj were found guilty of terrorism and sentenced to life in prison.

Haki Aziri was accused of providing aid in an act of terrorism, for which he is given a sentence of nine years.

Fejzi Aziri has been accused of aiding and committing an act of terrorism, for which he receives a sentence of 15 years.

Sami Luta has been acquitted due to a lack of evidence to determine his role in the killings.

Only three men from the five that were given jail sentences are going to serve time in jail. Halil Demiri and Afrim Ismailovikj are imprisoned in Kosovo, whose authorities have thus far refused to cooperate towards their extradition.

The jail sentences are the result of a second trial. The first attempt was sent back for a retrial by the High Court in 2017.

The decision was made by former state prosecutor Liljana Spasovska based on the possible influence the leaked telephone conversations may have on the trial.

In some of the recorded conversations, the public was able to hear politicians and members of the former government talking in reference to the killings.

The accused have maintained throughout the trials that they are innocent and the case is “constructed”.

Fejzi Aziri, initially a protected witness, now sentenced to life in prison, has called on the prosecutors Fatime Fetai and Vilma Ruskovska to visit him in jail and receive proof leading to those who had ordered the killings.

“If they don’t come in ten days, I am going to release the materials to the public” claimed Aziri on Tuesday, February 23. No such “proof” was ever released.

Haki Aziri, a nephew of Fejzi, had admitted during the investigation that on the night of the killings he waited for two of the defendants in a car near the highway to the north of Skopje.

Upon entering the vehicle, the defendants said to Haki, “we made a mess, we killed someone,” however Haki later withdrew his statements claiming that it was the result of torture at the hands of the police.

Fejzi Aziri, the oldest in the group, is a childless farmer and a former member of the Chucher-Sandevo municipal council.

According to the investigation, Aziri and others in the group had communicated between one another in codes, often using terminology related to poultry and livestock feed.

Aziri, who used phrases about large and small calibration of “corn” and “wheat”, is the owner of a 40-acre concession around the village Smilkovo, including the accumulation where the killings took place.

The killings further shook the nation which was reeling from a traumatic decade following the 2001 armed conflict between the Macedonian security forces and Albanian guerilla fighters.

On July 4, 2014 several thousand ethnic Albanians engaged in violent clashes with the police following the handed down jail sentences, concluding the first trial for the case Monster. The illegal protest rocked the city as the belligerent crowd wanted to reach the courts near the city center in Skopje.

Chants for a Greater Albania and Islamic dominance resounded throughout the streets. Another protest took place on January 29, 2021 when a significantly smaller group attempted to engage with the police, threw rocks and broke the windshields on a number of vehicles.