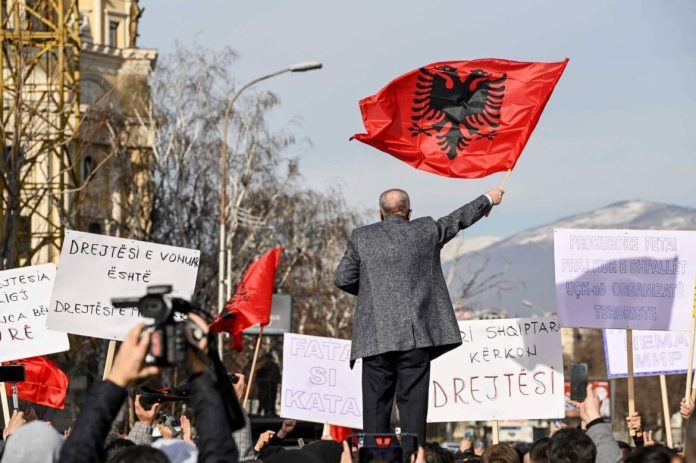 Several hundred family members and supporters of the accused on trial for the “monster” terrorist act at Lake Smilkovo protested in front in the Ministry of Interior this afternoon, with a government building and police vehicles damaged.

The vocal crowd chanted “UCK” and hurled insults at the prosecutor of the “monster” case Fatime Fetai, part of the crowd overturned bins, damaged police vehicles, smashed windows of the new ministry of political systems and threw stones at police, however a major clash with the strong police presence protecting the building was avoided.

The protest comes after Fetai closed the prosecutions case and called for the maximum penalty against the accused. The protestors and family members claim the accused are innocent and demand they be released.

The Smilkovci terrorist attack shook Macedonia in 2012 as five ethnic Macedonian civilians where massacred while fishing during Orthodox Easter. After a much publicized police action and trial, the accused where found guilty and jailed in 2014, large Albanian protests ensued and in 2017 a retrial was ordered under the new SDS-DUI government.

When in opposition current Macedonian Prime Minister Zoran Zaev stated that innocent people may have been jailed and that evidence existed that would shed light on the case during the release of the illegal wiretaps called “bombs”. Supposedly that evidence has been handed over in the re-trial, while the family of the slain victims claim they where used as political bargaining chips.