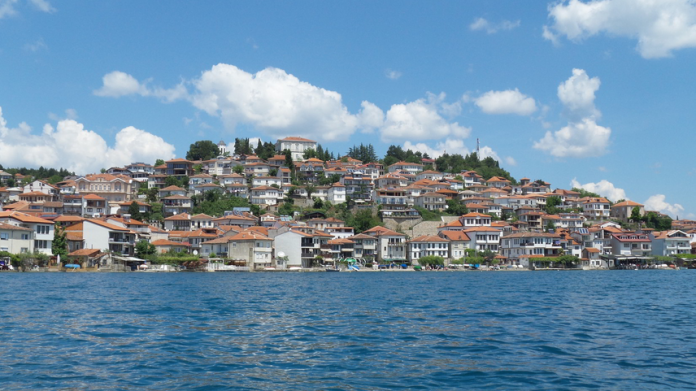 The United Nations Educational, Scientific and Cultural Organization (UNESCO) has issued a 123-page draft report that is the first step leading to an imminent downgrade of Lake Ohrid’s status of a protected World Heritage site.

The report was sent for review to the relevant municipal and state institutions that have oversight and control over the lake on both side of the Macedonian-Albanian border. The text also concerns the city of Ohrid as its old city core Varosh has been entered on the list of ‘protected’ sites for its exceptional cultural value.

In a statement for Telma TV, Donka Bardzieva – Trajkovska, Director of the Center for Cultural Heritage called the report “a shame” for the country and added that “someone has to finally take responsibility as to why nothing has been done since 2017.”

In 2017 UNESCO experts conducted an assessment of activities that have been recognized as a threat to the lake’s vulnerable biosphere and at the 2019 conference in Baku, the organization formally extended the requirement that the Macedonian government needs to act on its obligations for protecting the lake and the Ohrid old city core from further infractions.

The 2020 draft-report emphasizes that the authorities have slid backward when it comes to protecting the environment and preserving the genuine aesthetic of the Ohrid old town. According to the draft-report, not only have the old threats not been addressed or resolved, but new threats have emerged too.

The challenges pointed out by UNESCO are already known to the Macedonian public following numerous reports of illegal construction on the lake’s shore, the burning of lake vegetation near Struga, the emergence of provisional objects on the lake itself intended for accommodating tourists, the cutting-off of the Studenchiste wetland and the lake by a pedestrian track, and more.

Based on the conclusions of the document presented by the media, it becomes apparent that the municipal governments of Ohrid and Struga are ill-prepared to deal with the few powerful construction companies or their finances depend on the sale of new apartments on the lake and its vicinity and are unwilling to sever that flow of income.

Regardless of the reason, Lake Ohrid is under a threat and UNESCO points the finger to the municipal governments and the relevant government bodies for not enforcing the laws that protect the lake and the authenticity of the city core. As a result of this and if nothing changes in the meantime, it is expected that Ohrid is going to end up on the list of endangered world heritage sites at the next UNESCO conference.

Ohrid’s mayor, Konstantin Georgievski hasn’t made any statements since parts of the report were published in the media on Sunday, January 10.