Meet the Agriani – Elite units of Alexander the Great’s Army 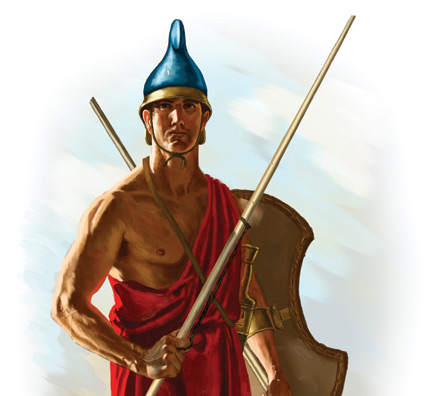 The name Agriani is shrouded in obscurity when it comes to the history of ancient Macedonia, however this tribe played an important role in the growth of the ancient Macedonian kingdom into an empire, which reached the distant Himalayas under Alexander III of Macedonia (the Great).

The Agriani were a Paeonian tribe that had attained a royal status. They were a people of kin to the Macedonians and where absorbed into Macedon proper soon after Phillip II embarked on his military campaigns. The Agriani have remained within the geographic/ethnic boundaries of Macedonia ever since.

A recent discovery of an Agrianian city in the region of Kumanovo sheds more light that this tribe had a system of governance and control of their territory that was far more organized than initially thought.

Recent work on the archaeological site near the village Mlado Nagorichane has revealed residential homes, roads and a necropolis, in addition to a cache of coins of the Paeonian king Audoleon – a general in Alexander the Great’s famous army. This is but one of the several archaeological sites that have been attributed to the Agriani.

The locality Brazda near Skopje has the most magnificent and well-preserved building of the Agrianians – a square burial chamber that is four meters deep and is made of large rectangular stone blocks. The site is near a small hillock which is a potential site of a larger burial chamber in the Macedonian style, which consists of a rotund mound surrounded by a dromos (road). It is without a doubt that this location is part of a broader urban complex that sits at a strategic place overlooking the Vardar river valley.

According to the ancient historian Strabo, the Agrianians lived on both sides of the Struma river (Strymon). The territory which they ruled over went as far as the source of the river Vardar (Axios). Seen from the perspective of modern geography, the Agrianian kingdom included the entire northern half of the Macedonian Republic and may have reached modern-day Sofia to the east.

The Agriani were an integral part of ancient Macedonia as they had important positions in the army of both Phillip II and Alexander the Great. Alexander positioned many Agrianians as generals, commanders and members of the royal guard – titles which weren’t given to non-Macedonians. This may help elucidate the question of the ethnic or linguistic characteristics of a tribe for which there is little historic information.

Historic sources note that the Agrianians were excellent javelin-throwers and fierce warriors. Alexander dispatched them as elite skirmisher troops, they where used to secure the right flank of his army and wipe out mountain or hill based forces such as the numerically superior Persians in the battle of Isus. Lightly equipped and fast-moving, they were considered lethal mountain-bred warriors.

The level of loyalty shown by the Agrianians helped build the Macedonian empire. Alexander the Great even married off his half-sister Cynane to Agrigarian King Langarus as favor for the Agrianian’s defense of the northern Macedonian borders from the Illyrians and Dardanians, the latter of which came to occupy the chief Paeonian city of Bylazora for a short period.

As for the similarities between the Macedonians and the Paeonians (which includes the Agrianians), both worshiped the sun, which is a continuation of the sun-worship cults present in their respective territories since neolithic times. Also, the Macedonians and Paeonians shared a pastoral way of life which was well-suited to the vast grasslands that dominate the hills and mountains. Another notable detail is that both Macedonians and Paionians were ruled under a monarchy.

One of the most remarkable examples of the Agrianian legacy in Macedonia is a non-tangible artifact that has been preserved in given name Agrian. Fascinatingly enough, the Ottoman census takers had annotated Agrian as a given name in villages in the Skopje and Kumanovo regions in the 15 and 16 centuries.

This finding, along with the Paeonian names of the cities Stobi, Doberos and Byla Zora, as well as the mountain Orbelos, provide further indicative detail to the matter of common linguistic connection between the ancient tribe and modern-day Macedonians.