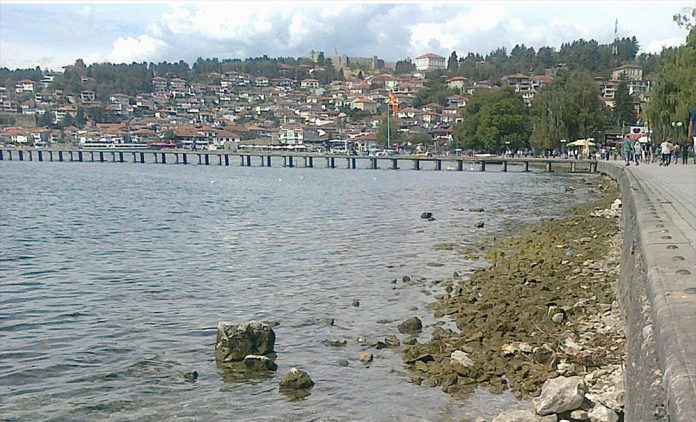 The sight of Lake Ohrid is unrecognizable lately. It wasn’t that long ago when the waves caused the water to splash above the edge of the walkway near the city center.

Despite two days of rainfall on December 8 and 9, the situation hasn’t improved and threatens to cause a major ecological catastrophe, including a massive die-off of species in Europe’s oldest lake.

The news portal Ohrid News cites the opinion of retired professor and lake expert, Dr Zdravko Krstanovski, who finds a major fault in using the lake for the production of electric energy that began in the 1960s.

According to Dr Krstanovski, the government hasn’t addressed the problem of unregulated outflow of the lake through the Black Drim river, which supplies water to two hydroelectric plants in Macedonia and few more in Albania.

Another serious challenge to the lake’s sanctity and to the status of the only UNESCO site in the country, is the unchecked and illegal construction boom on its shore. The UN body that gives a protected status to world heritage sites has warned of a possible withdrawal of the protected status of Lake Ohrid.

The most recent scandal took place in late November when eyewitnesses recorded footage of a truck and a bulldozer pouring soil and construction debris directly into the lake. The scene is from the Daljan area where construction companies are working on a set of buildings and, supposedly, a retirement home.

Significant disturbances on the shore of Lake Ohrid are common within the boundaries of the Struga Municipality. The town’s mayor Ramiz Merko publicly snubbed the calls for a stop to unlicensed construction work near the lake, saying “I don’t care what the environmentalists and NGOs say.”

There have been multiple eyewitness accounts, footage and news reports about large patches of reeds and other aquatic vegetation being burned down completely, allegedly, to make the areas more attractive for the beach bars nearby.

A number of newly-cleared areas have been turned into beaches in recent time, which could only be achieved by destroying protected areas. The Government has brought a motion that demands of the concessionaires to restore these areas to their original condition, but this has fallen on deaf ears.

Appeals by conservation groups, such as the vocal Ohrid SOS organization have also been ignored. The public is looking for answers, but the local governments are withholding the names of the construction companies in question and whether they have acquired the proper construction permits.

Ohrid SOS is persistent in demanding answers from the local and state governments. The organization’s latest formal request, dated November 24, aimed at finding out the name of company that was seen pouring construction debris and earth inside the lake at Daljan and whether their construction site has all of the required papers.

The Director of the State’s Inspectorate for the Environment gave a statement which acknowledges the illegal activities, while announcing legal sanctions. Yet, according to the Ohrid SOS Facebook profile, this is just empty talk to buy time for the companies, as they don’t expect anything to change.

Lake Ohrid is more than two million years old and is Europe’s oldest lake. The lake has the greatest biodiversity in the world per surface area, including countless endemic species.

In a positive turn, the Government has accepted the proposal to proclaim the Studenchista wetland as a protected Park of Nature. The area will be placed on the Ramsar Convention’s list for the protection of wetlands of international significance.

The Studenchisko Blato wetland is a complex part of the Lake Ohrid ecosystem, as it provides filtration for the water and ground for the reproduction of numerous living species, among other things. Ohrid SOS succeeded in overturning a decision by the Ohrid Municipality to include the wetland in the general urban development plan, which made it a coveted location for the construction of a marina for the lake’s boats and jet skis.