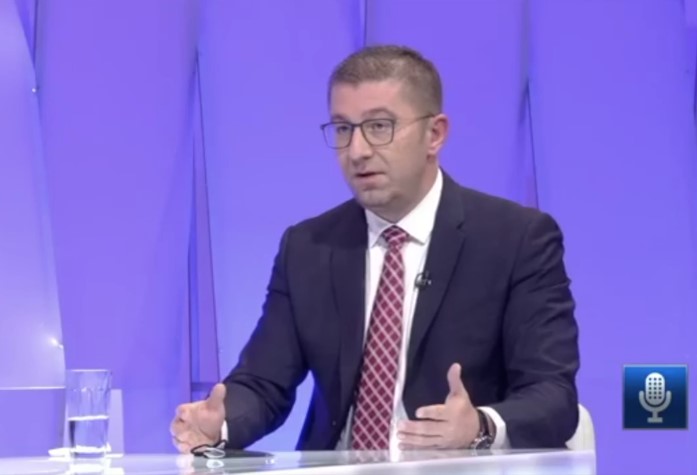 In a scathing attack on the Agreement with Bulgaria, Hristian Mickoski the head of the Macedonian opposition put into question European values, highlighting the failure of the agreement as the country is blocked from the EU path and its identity put up for negotiations.

In an interview for national broadcaster MRT, Mickovski said the party may propose a new agreement with Bulgaria as the current one has been a complete failure.

The bilateral agreement between the Macedonian and Bulgarian governments has become “exhausted” and there needs to be another agreement, stated Mickovski.

“Unless our partners in the EU, the politicians, the Brussels bureaucracy… don’t stand behind the European values, which gives me the right to having my own identity, history and language, it means that we are not sharing the same values, those of de Gasperi, Adenauer and Schuman.” said Mickovski highlighting the breach of European values.

Last week Czechia and Slovakia opposed the use of the EU to force a change in national identity and blocked Bulgaria’s efforts to include their terms in a EU enlargement document.

Mickovski is certain that the EU can work with Bulgaria to help it overcome its hegemonic policy over Macedonia. Saying the Macedonian state deserves to be rewarded for it’s efforts to advance to the next level and commence EU negotiations.

The printed newspaper and online news portal Sloboden Pechat has polled the opinions of political observers and analysts regarding Mickovski’s statement calling for the signing of a new agreement.

According to political scientist Mitko Gadjovski, a new agreement is likely to be worse than the current one, citing Bulgaria’s increasingly difficult new demands. Gadjovski thinks that the eventual concessions demanded of Macedonia would reflect the latest political language coming from the neighboring country’s politicians.

Recently, the Bulgarian Vice Premier and Minister of Defense, Krasimir Karakachanov, has stated that “anyone who has read five pages from history knows there is no Macedonian nation before 1945” to which the Macedonian Prime Minister Zoran Zaev retorted that the people didn’t wake up in 1945 to suddenly feel as Macedonians.

Political science professor Ljupcho Ristovski opined that the current agreement with Bulgaria is bad because it feeds the extremist positions harbored by Sofia. He concludes that there is no need for a new agreement until the eastern neighbor accepts the reality that Macedonia and the Macedonian people are a fact.

In his interview, Mickovski doubled down that he will never negotiate away the exclusive nature of the Macedonian language, identity and history. The opposition VMRO essentially allowed the passing of the Prespa agreement without serious objections, which is seen as a breach of human rights and identity by many Macedonians.