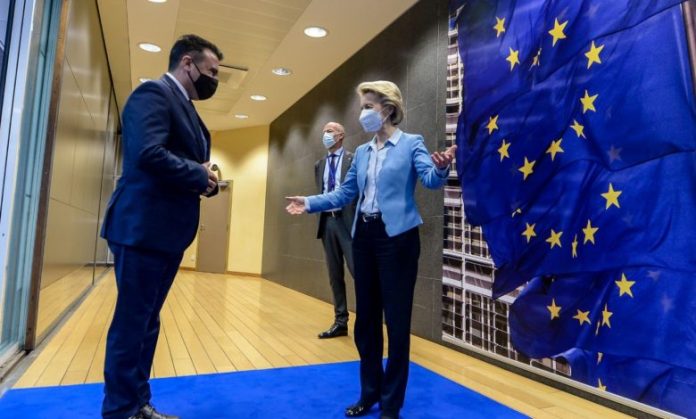 High-ranking representatives of the Macedonian government including Prime Minister Zoran Zaev have been busy on a diplomatic offensive aimed at promoting the country’s case in the stalled negotiations with Bulgaria, while calls to terminate the agreement grow at home.

According to reports from Zaev’s visits to Brussels, he stated that separating Macedonia and Albania from the negotiation process isn’t in anyone’s best interest and the EU’s unprincipled behavior towards his country can have security consequences for the Western Balkans region.

Zaev has doubled down on his recent statement that the matter of national identity and language can not be part of the negotiating table.

In an interview for Alfa TV, former UK ambassador Nikovski opined that the diplomatic effort is the same as “shouting in the desert” because the Bulgarian veto persists and can lead to the destruction of the country.

Nikovski reflected on the Bulgarian red lines that were drawn publicly by Bulgarian politicians, like prime minister Borissov and foreign minister Zakharieva.

In this view, Macedonia shouldn’t expect anything in particular from convincing EU officials, as many have been on the record saying the two countries must reach an agreement before Macedonia can begin negotiations with the EU.

Nikovski remarked that Macedonia should terminate the Agreement with Bulgaria unless that party stops throwing roadblocks along the way. According to him, Bulgaria has used the agreement to build a policy that is hostile to Macedonia.

Over the past two weeks, Foreign Minister Bujar Osmani has met with the ambassadors of Austria, Czechia, Hungary, Slovakia and Slovenia in Skopje and has travelled to a number of European capitals for meetings.

Deputy Prime Minister Nikola Dimitrov has called into question the EU’s credibility in view of Bulgaria’s veto after Macedonia changed its historic name but faced another obstacle.