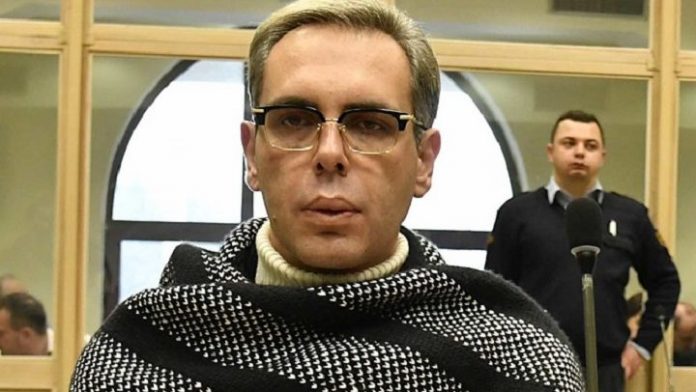 Bojan Jovanovski, the controversial television personality and showman and once darling to the SDSM-led government has fallen from grace as he is the subject of multiple legal charges.

Jovanovski stands trial in second another case in which he is accused of embezzling a vast sum of money belonging to private companies and people in the Macedonian business community.

Resul Loga, who is in the construction business, claimed he was defrauded of more than 350,000 euros through his company by the humanitarian organization Jovanovski used as a front for fraud and money laundering.

Jovanovski had told Loga and his business partner Adrijan Amzovski that their company can get the construction tender for a nursing home for senior citizen’s if they pay 350,000 euros in cash.

An additional cost of 16.10 million denars via bank transfer was requested for the architectural services of Jasna Mandik, who is one of the founders of Jovanovski’s organization called Megjunaroden Sojuz (International Alliance).

Part of the scheme, for which she is also tried by the court, was the then-acting Minister of Labor and Social Policy, Frosina Remenski.

According to Loga, he felt emboldened to invest the money because he saw Jovanovski in the company of then-minister Remenski and Aleksandar Kiracovski who at the time was member of parliament general secretary of SDSM.

The Megjunaroden Sojuz case against Jovanovski, Mandik, Remenski, his assistant Hristina Blazhevska and his father Mile, convicted the group for defrauding two individuals of close to 1 million euros and of laundering money.

Jovanovski, who is known professionally as Boki 13, was handed a nine-year jail sentence for his role in the disappearance of 1.5 million euros as part of a racketeering scheme targeting businessman Jordan Orce Kamchev.

In the case “Reket” (Racketeering) Jovanovski, his accomplice Zoran Mileski-Kicheec and the then-head of the Special Public Prosecution office, judge Katica Janeva, were tried and convicted for conspiring to provide Kamchev favourable circumstances during an investigation that puts him as the defendant in a separate case.

The Reket case resulted in the dissolution of the Special Public Prosecutor office which was headed by Katica Janeva with the goal of convicting and trying individuals and groups implicated in the leaked telephone conversation “bombs” that spelled the end of the VMRO-DPMNE-led government.

Jovanovski has claimed his innocence, maintaining that the case is mounted against him by the government.

In a statement during the trial, Jovanovski claimed that Zoran Milevski and Jordan Kamchev’s wife, Ana Kamcheva, had visited with the cabinet of the Prime Minister Zoran Zaev and that Zaev promised he will see to relaxing the circumstances surrounding cases implicating Kamchev, Mijalkov and others, “for the good of the business community”.

According to Jovanovski, Mileski had approached him claiming he works for Orka Holding – Kamchev’s company and that is very close to the owner. Mileski, a key witness in the Reket case, due to reasons still unknown, wasn’t summoned by the prosecution to take the stand as a witness.