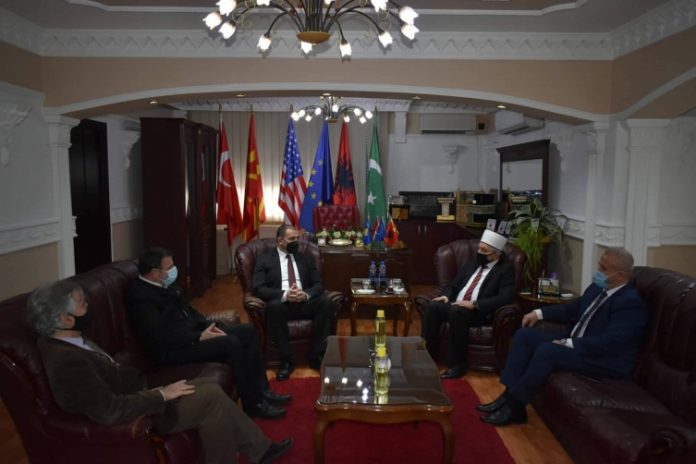 The head of the Macedonian Islamic Community, Reis Shaqir Fetahu, has expressed his disapproval of the chants calling for a “Greater Albania” and “UCK” during a January 28 protest staged by ethnic Albanians in Skopje in relation to the court case “Monster”.

On February 2, Reis-ul-Ulema Fetahu had a meeting with two representatives of the Center for Crisis Management – former general and 2001 war veteran Stojanche Angelov and the agency’s deputy president, Ekrem Zendeli, to discuss reconciliation between ethnic Macedonians and ethnic Albanian in the country.

A joint press release following the meeting condemned cases of radicalism and nationalism, such as chanting for a Greater Albania at any kind of a meeting or protest, as this gesture removes the focus of the event and creates inter ethnic hatred and intolerance.

The chants occurred during a protest of the relatives and sympathizers of several ethnic Albanians who were convicted to life sentences in the case “Monstrum” for the brutal liquidating of four innocent young Macedonians and an accidental witness on April 12, 2012, near Skopje, on the eve of Orthodox Easter.

The group of protesters threw stones at the building of the Ministry of Foreign Affairs, smashed the windows of police cars, overturned garbage containers and scuffled with the police.