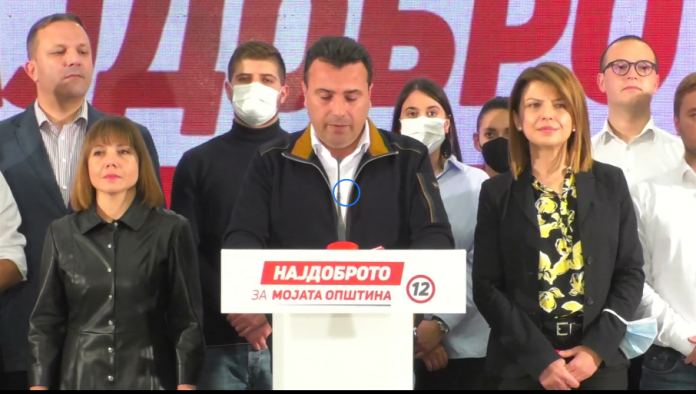 Macedonia’s ruling SDSM lead coalition was punished at the country’s 7th local elections held yesterday which saw the main opposition VMRO-DPMNE declaring victory and taking 22 out of 81 municipalities in the first round of voting.

The opposition celebrated in Skopje and around the country as it became apparent it would also take the council positions in 50 municipalities, resulting in a decisive swing in their favour.

Voting in the capital favoured the opposition, with independent mayoral candidate supported by the opposition, Danela Arsovska gaining 8000 more votes than the current divisive Mayor Petre Shilegov. The mayor of Skopje and the remaining regions with no outright winner will be decided in a fortnight in the second round of voting.

“This is not the end of the battle. The real battle is yet ahead of us,” VMRO DPMNE leader, Hristijan Mickoski announced at party headquarters in Skopje.

In a sober and gloomy atmosphere at SDSM party headquarters, Zaev announced “the elections are not over yet”, indicating the upcoming fight in the second round.

Increasingly popular left-wing party Levica saw a large influx of new votes and although it did not win a seat in secured advisor roles in almost all of the regions it ran in. Party leader Dimitar Apasiev said his party is open to cooperating with the rest of the opposition parties in toppling Zaev’s hybrid regime.

A uniting of the opposition parties in the second leg would almost certainly be a fatal blow for the government, with the possibility of early parliamentary elections and a fall of the most corrupt government in Macedonia from the past decade.

In the ethnic Albanian block, there seems to be a swing against government coalition partner DUI, it claims to have secured 3 mayoral seats while its rival, the Alliance for Albanians and Alternative, said they had won two mayoral seats.

There are 1.8 million people eligible to vote according to the State Electoral Commission and the turnout of the first round was 49%, with voting extended in many areas for several hours due to the technical problems faced by new German fingerprint technology.

Some incidents were reported, however, the election was held generally peaceful.

“Election day was peaceful, with respect for fundamental rights and freedoms and a competitive spirit. The main parliamentary parties have systemic advantages in allocating resources, including to the media. The campaign was conducted freely, but at times there was negative rhetoric towards women who were not adequately represented”, said Tana de Zulueta, head of the OSCE monitoring mission.