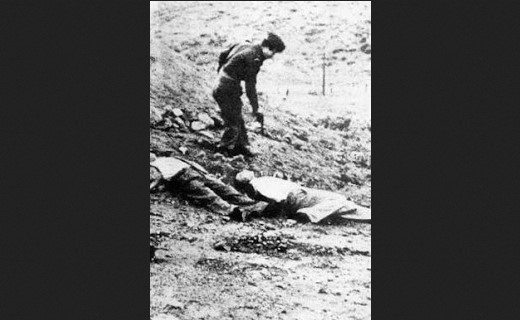 April 27, 1944 marks the killing of close to 1000 Macedonian women, children and elderly people at the hands of German SS units and Greek monarch-fascists – History professor Violeta Achkovska commemorated the massacre.

Genocidal units of Greeks and German troops entered these villages on April 29 to revenge the resistance posed by the Macedonian units of ELAS (Greece’s anti fascist movement).

The units slaughtered or burned alive 223 in the village Klisura. By the end of their marauding spree, the German and Greek fascist had massacred 640 women, children and elderly people in the village Katranitsa (Pirgi).

Eyewitness account of the atrocities were relayed by the Greek deputy corporal Dionisios Karandzas – Melas on October 21, 1944. Melas stated:

“The small town of Katranica, with 1,000 houses, was totally destroyed. The tax in blood resulted in 640 women and children being massacred in the most base manner.

For the duration of seven months, our eyes were witnessing heaps of corpses.

After all of the higher creatures were dishonoured, they were tied by rope, doused with a little bit of benzene – so that they burn slowly, and then set on fire.

Those who somehow escaped the atrocities became scattered in any which direction. From that moment on, the village ceased to exist.

Taken from a document provided by Todor Simovski and published in the journal “Aegean Macedonia during the National Liberation Struggle 1994-1945” – Archive of Macedonia, Skopje 1971.

Facebook
Twitter
WhatsApp
Linkedin
Email
Previous articleYoung Macedonians in Greece interested in discovering their roots amidst historic climate of fear
Next articlePendarovski: People jailed for entering Parliament are not terrorists, I support a new investigation