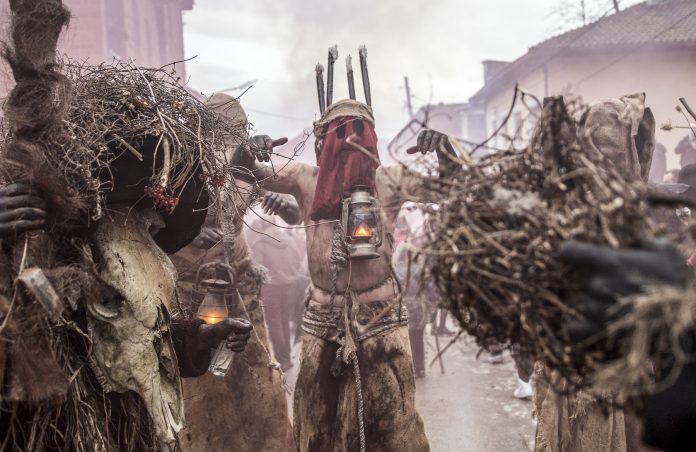 Macedonians celebrate two New Year holidays. In this case, two is definitely better than one, which means there are two days filled with holiday cheer among family and friends and in the company of delicious home cooking, warm rakija and wine.

While people around the world are making their New Year resolutions, Macedonians get a second chance to change their mind on January 14. This day is known as the Old New Year or Vasilitsa, celebrating both the coming of the new year and the day of Saint Basil.

One of the most fascinating themes about the Old New Year/Vasilitsa day is the old Macedonian custom of purifying the town or village of bad spirits in time for the warm season. Archaeological findings in the village of Vevchani dating back 2200 years suggest that Macedonians have been dancing and singing their way into the Spring season for a very long time.

The custom has had such a strong bearing that it became merged with the celebration of Saint Basil’s day – which is a Christian holiday. It isn’t a coincidence that the tradition is observed in the middle period of January. In Christianity, this period is known as “unchristened days”. In the Macedonian folklore, it is called “gluvi denovi” which means silent or deaf days, or “pogani denovi”, which can translate to pagan days or cursed days.

Either superstition or a keen sense of societal organization gave the people a reason to perform a holiday of food and drink, singing and dancing. The event is also a celebration that welcomes the Spring season, or the rebirth of nature that comes with longer and warmer days and new activities surrounding the fields and livestock.

Macedonians have many different names for the same event. It shows the strong cultural identities of the different regions around the country and the depth of the cultural roots that stretch from antiquity until today.

In the Bitola and Pelagonia regions the people who participate in the custom are known as Babari. In the regions of Skopje and Tikvesh they go by the name Djalamari, in the Razlog region in the East, they are known as Survaskari and Survari. In Aegean Macedonia, they were called Eshkari, but there are many other names, like Golomari, Strachinari, etc.

The people chase the evil spirits out of their town or village by building a big fire, which symbolizes the sun. The participants dress in bizarre animal skins and wear horns, dried gourds and cowbells. As the drum, the zurla and gajda are making a loud trance of sounds, the people dance oro, skip around and yell out scary cries – much to the joy of bigger children and to the terror of the little ones.

People who are visiting Macedonia around that period can visit Prilep, Kavadarci, Strumica, Bitola, Berovo, Kichevo and many other towns and villages, however, the most lively celebration is at the Vevchani carnival. The custom retains its spirit in the famed Macedonian village, but it comes with an even more exciting twist.

Revelers can observe a procession of traditional animal skin costumes but also bizarre masks and effigies. Macedonians from all parts of the country, but also foreigners, go to Vevchani to see a theater of masks and symbolism. Every year, the participants in the carnival send messages to the politicians. No one is spared – neither the ruling party nor the opposition, or the EU, the US or Macedonia’s neighboring countries.

It makes perfect sense that the Vevchani carnival has departed from the traditional custom in order vent out the Macedonian frustration with all of the above. For a day people get to be loud at protesting the state of the world and conditions in Macedonia. We can only hope that these messages reach the intended recipients.

Perhaps Macedonians around the world have forgotten about the Vasilitsa tradition of chasing the evil spirits, but it’s never too late to start something new that is actually very old. We invite you to wish good upon your family, fellow Macedonians and the land that we all love. Cast out the bad spirits with some wine or rakija and enter the New Year with a more positive attitude than before.