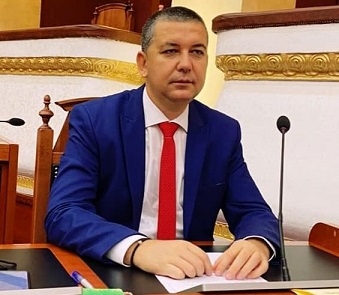 Ethnic Macedonian Vasil Sterjovski, member of the Albanian parliament has outlined the need for minority equality and the development of the region as key policies he is taking to the coming elections on April 25 in Albania.

Through the Macedonian Alliance for European Integration (MAEI) party, Sterjovski has joined the candidate list as part of the ruling Socialist Party of Albania in the elections.

While serving as a representative of the Macedonian community, Sterjovski has focused on developing the region which has a predominantly ethnic Macedonian population.

His party helped secure a 4 million euro project aimed at solving the decades-long water supply problem for the residents of the Mala Prespa region.

With an additional 10-million euro secured through a loan, the municipality will fix the rural road infrastructure, make pedestrian walkways, bicycle paths and develop beaches on lake Prespa.

One of the goals of this project is to develop the local capacity for tourism, which can, in turn, improve the livelihoods of those in the community, said Sterjovski in an interview for the channel SOT7 TV.

According to Sterjovski, Macedonians in Albania are facing numerous problems and difficulties and that the Albanian state has ignored them for more than 30 years.

Sterjovski recently voiced one of the crucial points on the MAEI agenda – that the ethnic minorities in Albania need to have guaranteed representation in Parliament According to his statement in the interview, this is the just way of representing the minorities in Parliament.

In his career as MP, Sterjovski made more than 50 addresses to Parliament. The 38-year-old is poised to win his second mandate in the electoral unit Korche (Gorica).