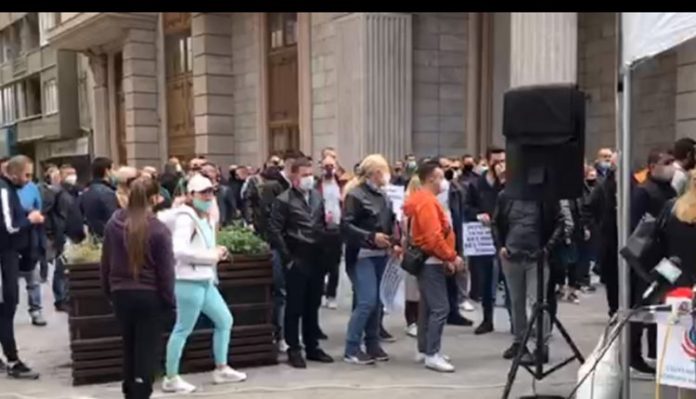 Owners of companies in the tourism and restaurant industries have staged another protest on Wednesday in Skopje to demand answers about the amount of financial aid which is to become available with the recent emergency finance bill.

The protesters gathered at the Ministry of Finance and used loudspeakers to declare that 17.8 million euros is not enough to cover the minimum salaries and expenses of around 60,000 employees working across 10,000 businesses.

Companies have to apply in order to get a share of this money but are unsure how much they can claim. The protesters demanded to know the methodology of distributing the money, which hasn’t been disclosed by any of the relevant institutions.

According to Martin Angelovski from the Tourism and Hospitality Chamber, these industries have been plagued by delays in the distribution of government aid. Angelovski stated during the event that business owners need to know the conditions for receiving this money.

Fatmir Bitikji, Deputy Prime Minister in Charge of Economic Affairs stated on Wednesday that the effect of the five financial packets for the economy have had a “100% effect”.

Bitikji didn’t reflect on whether the measure will satisfy the needs of those in the tourism and restaurant industries, but said that there will always be a dilemma about the success of the program, including the sixth set of measures.

These sectors of the economy have been closed for more than a year and many companies can’t remain liquid amidst the crisis. Their representatives at the protest today stated that multiple measures are needed in order to survive.

The Macedonian Tourism and Hospitality Chamber has demanded a one-time financial injection for each registered business that has been closed for more than a year, an additional grant for all other businesses in these sectors and a moratorium on interest rates or reprogramming of loans issued by commercial banks or the Bank for Development with the option for a grace period on payments.