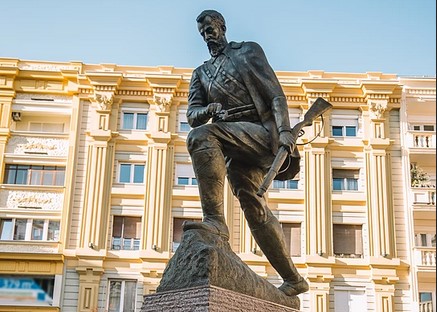 Hristo Dimitrov Uzunov was a heroic Macedonian revolutionary in the armed struggle against the Ottoman empire. He took part in educating Macedonians against foreign propaganda with an unwavering dedication to the cause for freedom.

His death on 24 April 1905 is one of the most heroic episodes of the Ilinden period. Immortalizing the Macedonian fight for freedom, an account of the event was publicized by the Italian priest Ettore Lodi.

Uzunov was born in Ohrid in 1878 into a family of educators and revolutionaries. His father, Dimitar, fought against the influence of the Greek bishop in the Ohrid region. His mother was related to Macedonian revolutionaries, the brothers Hristo and Milan Matov.

Hristo Uzunov was also a relative of the poet and educator Grigor Prlichev.

Prior to becoming a revolutionary in the struggle for Macedonian freedom, Uzunov was educated in Solun (Thessaloniki). He participated in the protests staged by Macedonians who studied in the Exarchate’s gymnasium.

He was an enigmatic figure in the Macedonian movement who resorted to secrecy in organizing the revolutionary forces. Due to his fear of betrayal, he went under many different names, including Arsenij, Arso, Maglata (The Fog), Risto, Samoil and Dule.

Due to his abilities as a leader, he was invited to participate in the Congress of Smilevo where he engaged directly in preparing for an uprising. Prior to this, he was already leading a band of komiti in the Ohrid and Debrca region.

Following the violent suppression of the uprising and the absolute lack of support and humanitarian aid from the great powers of Europe or any of the free neighboring states, Uzunov directed his efforts to repel foreign propaganda in Macedonia.

At the time, the Macedonians became engulfed in ideological differences related to the matter of how to continue the battle for Macedonian freedom. Uzunov took the side of the Centralists, who wanted to purify the organization of foreign, antagonistic influences.

On 24 April, 1905 Uzunov and 11 other komiti were near the village Cer (Tser) in the Kichevo region where they were surrounded by Ottoman troops.

Uzunov’s group resisted the attack of the more numerous regiment. Upon realizing they can’t make an exit from the trap, the komiti sat in a circle and each one pulled the trigger on the person sitting next.

The Turks recognized the greatness of the heroic resistance and honored it by firing a round of bullets in the air.

Ettore Lodi, an Italian bishop who was in Macedonia at that time, happened to be nearby the village Cer where he made witness to the aftermath of the shootout.

Lodi wrote: “The corpses of eleven young heroes, each one with open wounds on their chests and heads, took their own lives not to fall victim to their enemy.

I was pointed to their voivoda, Uzunov. His body was stretched on the ground. His arms were spread. His dead eyes were open, but they were looking up in the infinity.

Blood was still pouring from his forehead. I will never forget that sight. In those moments, I saw Macedonia – she was a martyr, a grand thing, undefeatable.” 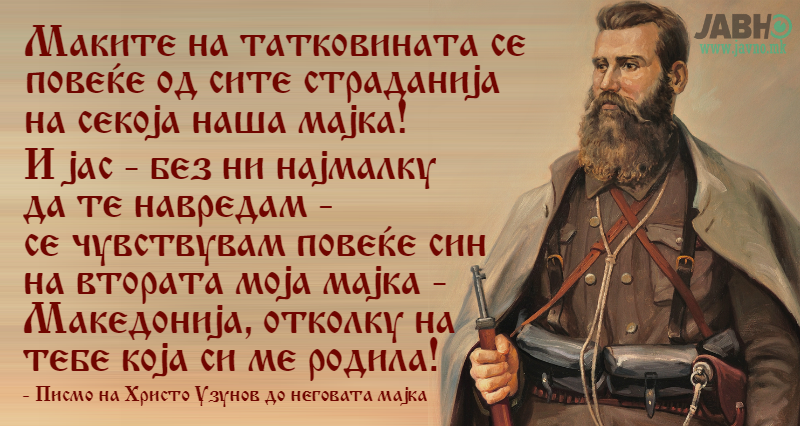 i Say this Without wishing to hurt your feelings, but I feel that I am the son of my second mother – Macedonia, then to you, mother, you who gave birth to me.

– Hristo Uzunov in a letter to his mother.