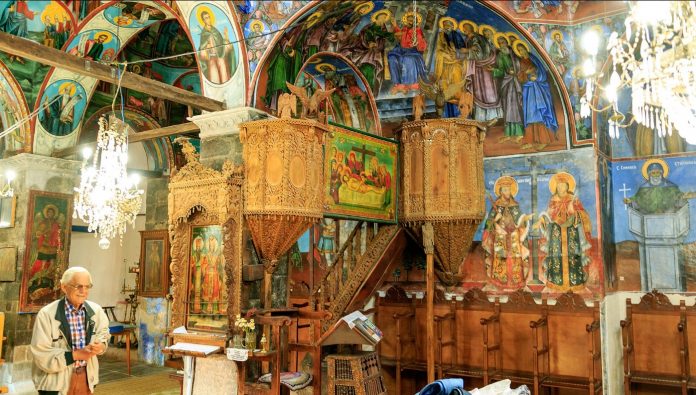 The village Lazaropole is situated on the picturesque mountain Bistra, which is part of the Miyak region. The wooded area around the village and the lush vegetation make this one of the mandatory stops for those who are touring the villages of the regions Mavrovo and Reka

There are no permanent residents in Lazaropole today. Its remoteness and altitude of 1350m, but also the absence of stores and people, are incompatible with our modern expectations of life.

Nevertheless, people who originate from the village return there often to enjoy the beautiful nature and to get a good night’s sleep in the old houses made of stone, mud and wooden beams.

One of the things that gave Lazaropole a powerful appeal was Saint George’s church and its magnificent iconostasis. The church was built in the very center of the village in 1832, however, experts have argued that its foundation dates from an earlier time. This can be supposed from the caption “Build and Renew” painted on the wall of the south entrance.

Regardless of whether it was built from scratch or atop the foundations of an older church that had ceased to exist, the construction of Saint George’s was supported financially and possibly with the personal labor of the legendary Gjurchin Kokale (1775-1863).

Kokale(ski) was born in Lazaropole and became a wealthy landowner and reputable figure in his region. He was so respected that the Ottoman Sultan had received him for a visit and gave him a permit to carry a weapon – something which was outlawed for the members of the Christian population.

Gjurchin Kokale(ski) is also known for having authored the first autobiographic text in the Macedonian vernacular of his region’s dialect and later becoming one of the earliest Macedonian educators and revolutionaries in the cause for a free Macedonian nation.

Kokale had ensured the hiring of the best and most talented Macedonian fresco-painters and woodcarvers who gave the church its historic importance. Two remarkable figures that have been evidenced in the world of Macedonian church art and architecture are the painter Dimitar-Dicho Zograf, who signed his frescoes as “Dicho of the State of Debar”, and the builder Stojan Jovan of the village Lukovo.

The most prominent piece of inventory inside the church is the so-called “royal doors” or “heavenly doors” which keep a barrier between the common area and the altar.

The wood-carving technique that is visible on the doors is marked by exceptional complexity and detail. It is very likely that it was made by the same troupe of artisans who had created the wooden elements in the Bigorski monastery, a number of churches in the Ohrid region and the altar doors inside the Saint Mother of God monastery in the village Sogle, Veles region.

Paintings of the prophet kings David and Solomon, of the holy Apostles Peter and Paul and of Jesus Christ who is assuming a blessing gesture, were made by the zograf (icon painter) Nedelko of the village Rosoki at the end of the 1700s. Nedelko’s Holy Mother of God holding a book and standing next to a vase with a flower is a pretty and rarely seen depiction.

There are two icons, one of Jesus Christ and the other of the Holy Mother of God, that are remarkable for the silver-plated detail that represents the halo and arms and a stunning fresco of the church’s patron, Saint George.

This fresco was painted in 1836 by the painter Mihail who was born in Epirus and has painted details on numerous churches in Macedonia, including frescoes inside the Birogski monastery.

The church abounds in magnificent iconography of both Old and New Testament figures. Macedonian experts have recognized a number of icon-painting techniques in the St. George church in Lazaropole. There are traces of western baroque, post-Byzantine and Macedonian artistic influences.

The Serbian publicist Smiljanich-Bradina has written the oral tradition about the construction of the church. According to that tradition, Gjurchin Kokale had requested of the Bishop Melentie to send fresco painters to Lazaropole and to consecrate Saint George’s church on St Elijah’s day (Ilinden).

Bishop Melentie was in the Hilandar monastery on the Holy Mount Athos, but he dispatched two men: Charalambos, a Greek who was dark and thinly-built, and the blue-eyed Dimche, also known as Dicho, who was a Macedonian with a tall forehead and a ‘perchin’ (braid) on the top of his head, swaying from behind one of his ears.

Since Dicho was the younger of the two and Charalambos had more experience as an icon painter, he was not too eager on teaching the Macedonian his technique. They had been working together for three years, however, Dicho was always given less important work.

This changed in Lazaropole. After a short period, the Greek began making passes to the young women of the village and he was called out for it but was retained as a painter because he had been paid a good sum of money in advance. The financier of the church has appointed Charalambos to work on the graphic detailing, while the main work was given to Dicho, who continued to make many of the church’s famed icons and frescoes.

All this beauty and mastery of fine crafts has been sullen by a tragic event when a thief or thieves broke the doors that lead to the church and stole a great number of icons from the famed Lazaropole church iconostasis as well as the wood-carved doors to the altar. The perpetrators haven’t been found. It is argued that those who stole the icons or who had ordered them to be stolen, knew very well what they are after.

The church has been robbed of its finest and most valuable icons and that has caused sadness in the hearts of Macedonians. If there can be a ray of light amidst this tragedy then we can find it in something that can not be stolen. The church of Saint George has one of the proofs that the Macedonians today are descendants of the Macedonians from antiquity because the symbol of the sun has been immortalized by one of the fresco-painters, more than 150 years ago.

A grand painting that is filled with symbolism about the eternal power of the sun is kept inside the church and this knowledge is kept in the hearts of Macedonians who are withstanding a powerful attempt that wishes to suffocate the Macedonian spirit.